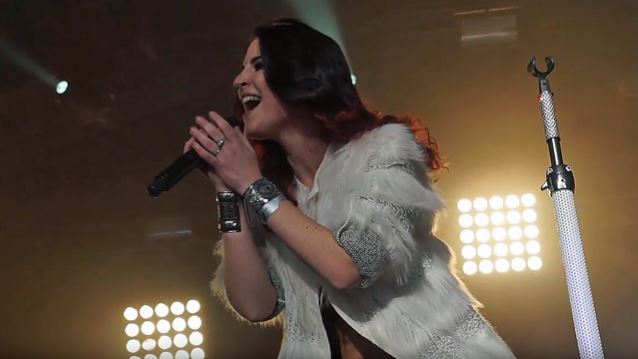 Xpress Radio conducted an interview with singer Charlotte Wessels of Dutch symphonic metallers DELAIN at this year's edition of the Download festival, which was held June 10-12 at Donington Park in Leicestershire, United Kingdom. You can now listen to the chat below.

Speaking about the songwriting process for DELAIN's recently completed new studio album, which is tentatively due in late summer, Charlotte said: "For this new album, we cut up… Normally, you would like to take a few months to go into writing mode, to go into recording mode, and then go and put it all together. But we never really had the time for that this year. We kind of did a few writing blocks and a few recording blocks and a few production blocks. I really like the way that has allowed us to keep touring and to not take a break on anything else we were doing. On the other hand, I do also like the feeling of really immersing yourself in that creative process, and for my taste, we've been having to move on very soon. It's not really saying that one is better than the other, but everything comes with a price. And last time we were really, really busy touring, and I wouldn't have done anything else, but you do notice that for everything that you want to do, there's something else that you cannot do. So now we solved that challenge by kind of cutting up that whole production of the new album in different blocks. And I think it was a creative solution that worked."

DELAIN's new CD, which will contain a cover version of an as-yet-undisclosed song, will be supported by a European headlining tour in the fall, including a U.K. run of dates in November.