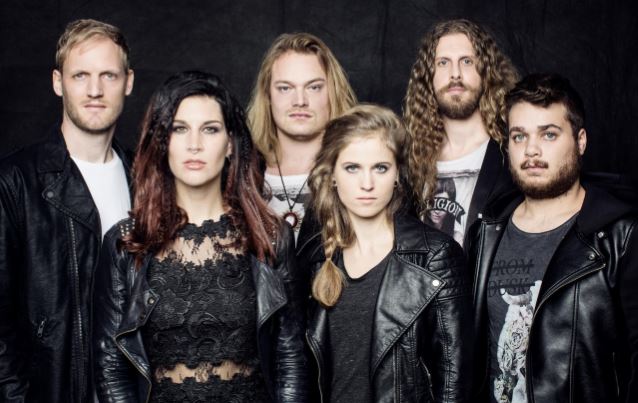 Dutch symphonic metallers DELAIN will celebrate their tenth anniversary with a special show in Amsterdam on December 10 that will also be recorded and filmed for a release on CD, DVD and Blu-ray.

The band states: "Happy birthday to… US! Dear Delainers, as many of you know, 2016 marks a very important milestone for DELAIN: our tenth anniversary in music! In September 2006, we released our debut record, 'Lucidity', and YOUR overwhelming response to our first record made us turn DELAIN the project into DELAIN the band. That was ten years ago, and today, we find ourselves looking back at a decade of rocking stages all over the world. Four albums, two EPs, and ten years later, we feel that we need to celebrate this milestone properly…with you!

"On December 10, 2016, legendary Amsterdam music venue Paradiso Amsterdam is ours to celebrate our ten-year anniversary. We are planning to go all out for this one! Best of all, the entire show will be recorded and made available on DVD, Blu-ray, CD, vinyl, and digital download!

"We've made it as a band for ten years thanks to you, so we turn to you directly to help us make this happen. Please check out our Pledge campaign and get ready for the biggest birthday bash ever! We are incredibly excited about this project and we hope you will join in with us!"

DELAIN released a new EP, "Lunar Prelude", on February 19 via Napalm Records. Mastered by Grammy Award-winning engineer Ted Jensen, the set offers two brand new songs in the shape of the catchy "Suckerpunch" and the melancholic "Turn The Lights Out". "Don't Let Go" (taken from 2014's "The Human Contradiction") comes in a brand new version, while the EP also contains four incredible live cuts, as well as an orchestral reprise of "Suckerpunch", all of which proving once again how DELAIN are blatantly known for their extremely catchy hooks, bewitching melodies, symphonic bombast, and, of course, a good solid dose of metal!

A new DELAIN studio album is tentatively due before the end of the year.