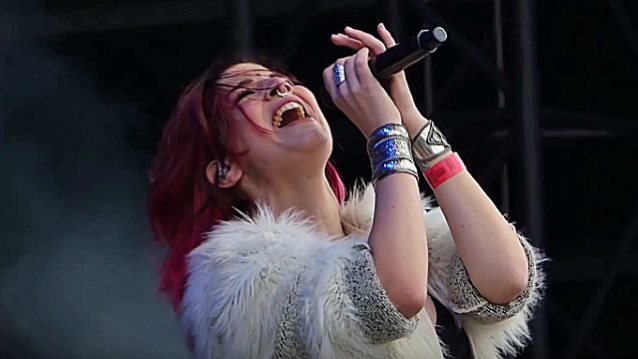 Eclectic Arts conducted an interview with Charlotte Wessels of Dutch symphonic metallers DELAIN prior to the band's May 6 show at El Corazon in Seattle, Washington as part of their co-headlining tour with HAMMERFALL. You can watch the full chat below. A few excerpts follow (transcribed by BLABBERMOUTH.NET).

On why DELAIN has focused on touring in North America:

Charlotte: "It's a really comforting idea when you perform a gig and usually the people in the front rows, you'll be like 'I've seen you before.' Like, 'Hey! How have you been?' That's really nice. People told us, ever since the first time we wanted to go to the U.S., 'If you really want to be touring in the U.S., it's going to take a lot of time. You're going to have to do five support tours before you can even start to headline.' It was a careful consideration, like, it's no use in going one time. The first tours you do will always be an investment toward the future. Once we've done that first tour, we were already planning to do the follow-up as well. We really want to make it, it sounds very business-like, but [one of our] 'touring markets.' That way, you can actually, in the long run, make the investment worth it. Also, of course, it can also be that after one tour you're like, 'Okay, this didn't work.' So far all of the supporting tours we've done, we've experienced the audience as usually welcoming and happy to see that we came back. That's also a push for us to see 'Okay, we're on the right track here. We're not just doing a tour. We're actually building up to do our own tours later.' Now with the co-headline tour with HAMMERFALL, I already feel when we're on the stage every night during our full set, 'Yeah.' People try to talk us out of it, like, 'It's so much work. It's so many years of touring.' But we're in for it for the long run. That's what we're going to do and we did! And we're here."

On whether DELAIN has any plans to take a break from recording or touring:

On her thoughts on America's current political situation:

Charlotte: "It's very comparable to a couple of things which are happening in Europe as well. In our politics, we've got the same kind of people doing the same kind of things and also the way people vote, it's very much a global trend. Of course, in the U.S., I think a lot of people were really shocked at the outcome. In Europe, I was actually talking to my… I ran into one of my professors from the Gender Studies department and I asked her 'Is anything being organized, seminars? Are we talking about this?' The reply I got was 'Yes, but we're mainly focusing on what is going to happen in the Netherlands in a few months.' Yeah, without getting too political about it, like I'm not scared of politics or anything, but I know a lot of people vote for different things for different reasons. I don't want to dismiss anyone's feelings, whether I think certain choices are right or wrong. There is a feeling at the heart of it. You can never say that your feelings are wrong because people are having those feelings. But the fact we are so divided I think is a very negative thing. That's happening in the U.S., it's happening in Europe. I feel the gap between different groups is really far away. I think it's very troublesome. I wish it was different. I, myself, I'm on one side of the spectrum and other people are on another side of the spectrum. I have been very outspoken about where I am; that's not a secret. But, yeah, I think it's sad the division is growing and more and more people are just basically yelling opinions into the universe instead of having conversations. Conversations turn into fights very easily. Whether it's neighbors talking about each other about certain things or politicians talking about things, I feel on every level, that it's growing apart. I think it's incredibly sad."

DELAIN's co-headlining tour with HAMMERFALL wraps up on May 18 in Atlanta, Georgia. This trek marks DELAIN's first run of U.S. dates in support of its new album, "Moonbathers", which was released last August.