Florida-based death metallers DEICIDE will team up with Poland's VADER for the Winterfest 2009 European tour in January. Also scheduled to appear are SAMAEL, DEVIAN and ZONARIA. A list of confirmed dates can be found on the poster below.

DEICIDE has tapped Kevin Quirion from ORDER OF ENNEAD as its new touring guitarist. Quiron made his live debut with DEICIDE on September 13 in Ft. Lauderdale, Florida.

DEICIDE's latest album, "Till Death Do Us Part", sold 2,900 copies in the United States in its first week of release, according to Nielsen SoundScan. It is the follow-up to "The Stench of Redemption", which registered a first-week tally of 4,000 back in 2006.

VADER's Scandinavian tour with GRAVE, ZONARIA and GILLA BRUJA will kick off on October 17 in Vilnius and will runs through November 1 in Aarhus. In the meantime, the pre-production for VADER's next album is scheduled for December at Poland's Hertz Studio. The recording session is planned for February/March, while the mixing and mastering will take place in April/May. 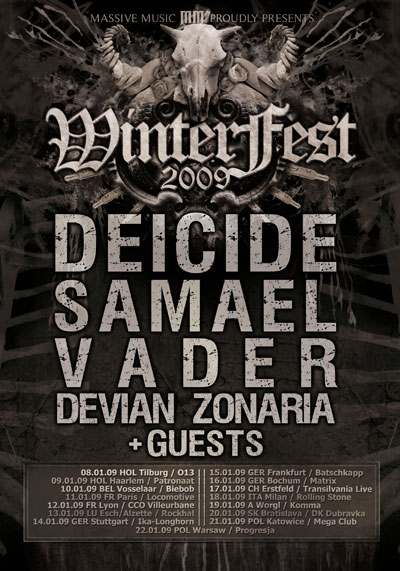