A guitar previously owned by Ralph Santolla (OBITUARY, DEICIDE, DEATH, ICED EARTH) is currently being auctioned via eBay. All proceeds will go to the family of DECAPITATED singer Adrian "Covan" Kowanek, who was seriously injured on November 2, 2007 in a Russian road collision.

Commented Ralph: "As most people know, the drummer for DECAPITATED, Vitek, lost his life in an auto accident while on tour in November 2007. His singer, Covan, was seriously injured. He has a very long road to recovery ahead of him, and he and his family face enormous medical costs. At the end of the Winterfest tour [featuring DEICIDE, VADER, SAMAEL and DEVIAN], we gave Vitek's brother, Wacek (Waclaw 'Vogg' Kieltyka; guitarist for VADER), a Jackson Randy Rhoads 24-fret guitar that was signed by the entire tour. This guitar will be auctioned to raise money for Covan and his family. This guitar was used on DEICIDE's 'Till Death Do Us Part' album, OBITUARY's 'Left to Die' EP and many, many tours and festivals. It's also an amazing instrument. This guitar has seen more of the world than you! Please do whatever you can to support this cause!"

Metal Mind Productions released the first-ever DVD from DECAPITATED, entitled "Human's Dust", in June 2008. The DVD was made available in two versions: as a standard DVD and as a very unique star metalpack DVD edition limited to 3,000 copies. The main feature of the DVD consists of the band's October 2002 gig in Krakow, which was a part of their European tour with VADER and KRISIUN. Bonus material includes two live performances recorded during Ozzfest in Poland (May 2002) and Metalmania festival (March 2004), the "Winds of Creation" video clip, plus three interviews recorded at various locations: Kraków in 2002 (Vitek and Vogg); Ozzfest in Katowice, 2002 (Vogg and Sauron); Metalmania in Katowice, 2004 (Sauron and Martin). Also included are a photo gallery, biography, discography, desktop images, weblinks. 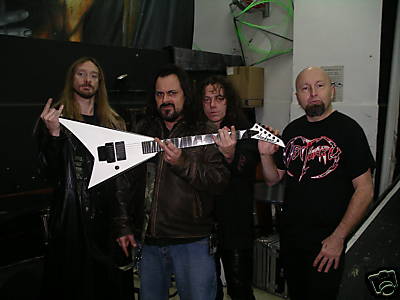