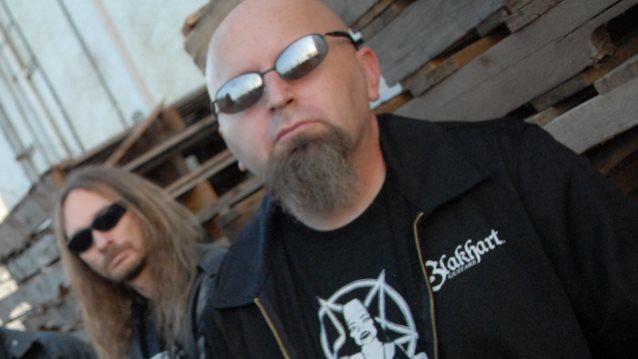 Chuck Marshall of Metal Wani recently conducted an interview with drummer Steve Asheim of Florida death metal veterans DEICIDE. You can now watch the chat below. A couple of excerpts follow (transcribed by BLABBERMOUTH.NET).

On how the recording sessions for DEICIDE's long-awaited follow-up to 2013's "In The Minds Of Evil" album are coming along:

Steve: "The record is coming along. We've got songs recorded — rhythms, drums — and it sounds amazing. It's gonna be heavy as shit. What we're waiting to do is complete it with vocals, leads and the mix, and that kind of takes some time. We could have rushed in there to try and get it done, but we don't really wanna do that. We did that before with records, and it doesn't work out. It pays to wait a little, make sure it's right, everyone feels good about it. I'd like it to be done sooner, but I'd like everything to be done sooner."

On when the new DEICIDE album will get released:

On DEICIDE's musical approach on the upcoming album:

Steve: "The challenge was just trying to, as always, not repeat yourself too much — come up with something catchy, but not blatant, and something that is not overly technical but kind of sounds technical. But there was this one thing that everyone was saying… I demoed this one song, and they were, like — and don't get me wrong when I say this — they were, like, 'Dude, that kind of sounds like JUDAS PRIEST.' And I was, like, 'That's interesting.' 'Cause, I mean, it's fast and heavy and it's just an onslaught, but there was a catchiness in the riff writing, with the big chords and the change that was kind of reminiscent of PRIEST, I guess. I've heard that from two separate people. Glen [Benton, DEICIDE frontman] said that and [producer Jason] Suecof said that. And I never knew Jay to be a huge PRIEST fan by any stretch, but he picked up on it. And I just remember the one particular riff was… I'd been working out the line for a while, figuring out how to get it just right. All the pieces are there, and I don't wanna use too much of it and I don't wanna use too little of it, and I wanna arrange it just right and play it properly and then get the most out of it. So I hit on it one night. I was, like, 'That's it.' It's almost like a church hymn, how it's arranged. A three-chord thing, that repeats, then you shift to one chord, then it comes back, and you just use the same pieces to mix it up; you don't have to go too far. Three chords — that's it. It's just how you arrange that. It was powerful. So I'm waiting for people to hear that, yeah. It's gonna be awesome."

Steve: "Mark's working out great. He's nailing all the leads. He's a good… I was gonna call him a kid; he's older than me. And he's good to travel with. He plays tight. He's pretty tight with the band. He's concerned about being tighter, so his head's in the right place, he's playing good. And it's only been a week, so we'll see. But nah — he's good. We're enjoying it, I think he's enjoying it, so it's good. It's a good fit so far. He's nailing the leads [which] is the main thing. 'Cause we've got a lot of super-technical stuff, and Kevin [Quirion, DEICIDE's other guitarist] wasn't able to really nail the stuff. And Jack [Owen, former DEICIDE guitarist] was never nailing it, so it's good to bring that likeness of the record live, bring that into the picture instead of slopping it out and hoping for the best. You can expect it to be authentic."

On Jack Owen's departure from DEICIDE:

Steve: "We were just kind of writing the record, and we were going over the songs. Me and Glen, we were, like, 'We wanna redo the songs.' It's like we had completed them — about nine or twelve, whatever how many songs. They were all right, but we weren't really psyched about them. So we decided to rewrite them. And Jack didn't really like it. And he kind of left one day and just never came back. So that was that. He's not on [the new album]. I haven't talked to the guy in almost a year."

"In The Minds Of Evil" sold 2,600 copies in the United States in its first week of release. Issued on November 25, 2013 via Century Media Records, the follow-up to 2011's "To Hell With God" was recorded at AudioHammer Studios in Sanford, Florida with producer Jason Suecof.