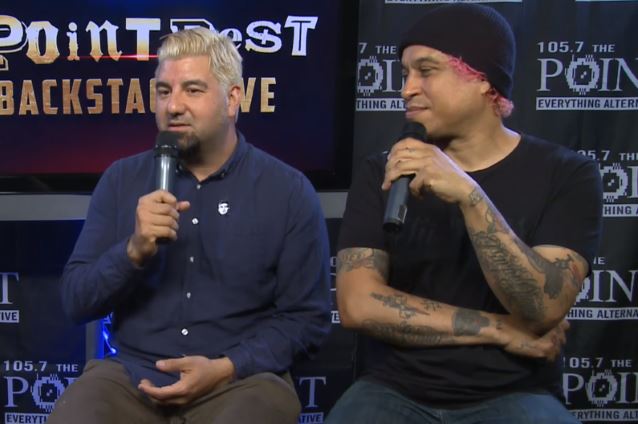 Rizzuto of the 105.7 The Point radio station conducted an interview with DEFTONES singer Chino Moreno and bassist Sergio Vega at the Pointfest on May 21 at Hollywood Casino Amphitheatre in Maryland Heights, Missouri. You can now watch the chat below.

Asked how the members of DEFTONES get together to write new music now that they all live in different parts of the country, Chino said: "We hub out of Los Angeles usually, and we have a little studio about the size of this room here, and we just lock ourselves in there, and that's how we make records. And we found that that's the way that you're gonna get the most, probably, organic experience of just us reacting to each other's ideas in the moment. We don't write songs and send them off to each other [via the Internet]."

Added Sergio: "It's different. When you're in a room together bouncing things off each other… 'Cause you could be home by yourself, and we all the ability to demo things out, and we could send each other riffs all day, but it doesn't come to life unless you're actually together and you see the look in somebody's eye and they're excited. And you bring something different when you're just presenting ideas around your boys. You want 'em to be hyped."

Continued Chino: "Just us reacting to each other and then capturing that moment in time, that's what we are as a band."

Asked if the members of DEFTONES have always written songs together as a band, Chino said: "Early on, that's the way we did it. There was a couple of records in there where we did not communicate that well, and I feel like those records, we kind of got out of 'em what we put into them. Everybody just kind of came in and did their parts, and it is what it was. They weren't bad, but it just wasn't… The essence of, I think, what we are… We are five different people with five different completely… We like a lot of the same stuff, but we also like a lot of other stuff. And we live different lives in different cities, so we all bring something unique to make DEFTONES, I guess, what it is. So that's the idea — to capture that: what happens when we all come together."

DEFTONES' latest album, "Gore", debuted at No. 2 on The Billboard 200, having shifted 71,000 equivalent album units in the week ending April 14. It was the band's highest-charting effort since their self-titled fourth album bowed and peaked at No. 2 in 2003.