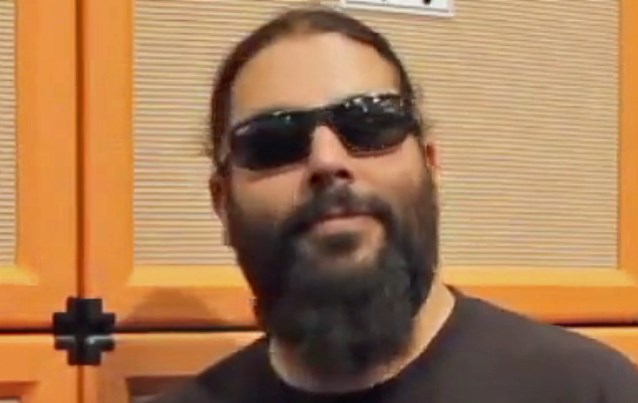 MusicStoreLive.com conducted an interview with DEFTONES guitarist Stephen Carpenter at this past weekend's NAMM show in Anaheim, California. You can now watch the chat below.

Speaking about DEFTONES' plans for the coming months, Carptenter said: "We are actually writing a new record and we're gonna… We're supposed to be going in to record it next month, but we're taking it as it goes. I mean, we're not all the way ready now, but we've still got time and we're working on it."

DEFTONES singer Chino Moreno said in 2013 that he believes that the band should and will release "Eros", the album it recorded before bassist Chi Cheng was left in a semi-comatose state by a car accident in November 2008. Although Moreno was not sure if the disc would ever surface, his feelings have changed since Cheng's death. Moreno told MTV Hive, "I get asked about that record a lot. For a while, I was giving the same answer, 'No, no, no, no, no, no, no.' After Chi's passing, I went back and listened to some of the record and it was a pretty intense experience, to say the least."

Moreno added, "I think it should be released, but we don't have any definite plans. There's some work to do on it. DEFTONES have been moving forward in a strong, positive motion, so for us to stop and reflect on something five years ago, I don't know if we're ready for that."

But he also said, "It is a special thing for us: it's the last thing Chi played on. It will see the light of day. I just don't know when."

Bassist Sergio Vega played on "Diamond Eyes" and the most recent DEFTONES disc, "Koi No Yokan".