DEFTONES frontman Chino Moreno has told CBS Sacramento that he was in Paris when a series of attacks rocked the city Friday night (November 13). His band was scheduled to perform at Bataclan on Saturday, and he was at dinner when shots rang out. His security team managed to him and his family back to their hotel room.

"Yeah, we're safe," he told CBS Sacramento. "We weren't scheduled to play at the Bataclan until tomorrow night. A couple of [the DEFTONES] band members, they went to the [EAGLES OF DEATH METAL] concert, but they left early — after the first few songs, they ended up leaving the venue. They got out of there and all of our band and crew are safe and accounted for at the hotel now. So, we are just here, we're pretty much on lockdown. They told everybody pretty much to stay indoors and don't go out, because they're still… Everything is still unfolding as we speak."

The worst of last night's carnage occurred at the EAGLES OF DEATH METAL concert, where at least 80 were killed. More than 1,000 people were inside the hall at the time of the rampage. A journalist who was at the concert there escaped and told CNN: "I found myself inside the concert hall when several armed individuals burst in, in the middle of the concert. Two or three men, without masks, came in with Kalashnikov-type automatic weapons and began shooting blindly at the crowd ... it lasted 10, 15 minutes. It was extremely violent and there was a wave of panic. Everyone was running in all directions towards the stage. It was a stampede and even I was trampled on. I saw a lot of people hit by bullets. The gunmen had loads of time to reload at least three times. They weren't masked; they knew what they were doing; they were very young."

DEFTONES have just finished mixing their long-awaited follow-up to 2012's "Koi No Yokan" for an early 2016 release. According to Moreno, sixteen songs were written for DEFTONES' new CD, which was once again produced by Matt Hyde (SLAYER, CHILDREN OF BODOM, MONSTER MAGNET, WINDS OF PLAGUE). The effort will feature a guest appearance by Jerry Cantrell (ALICE IN CHAINS). 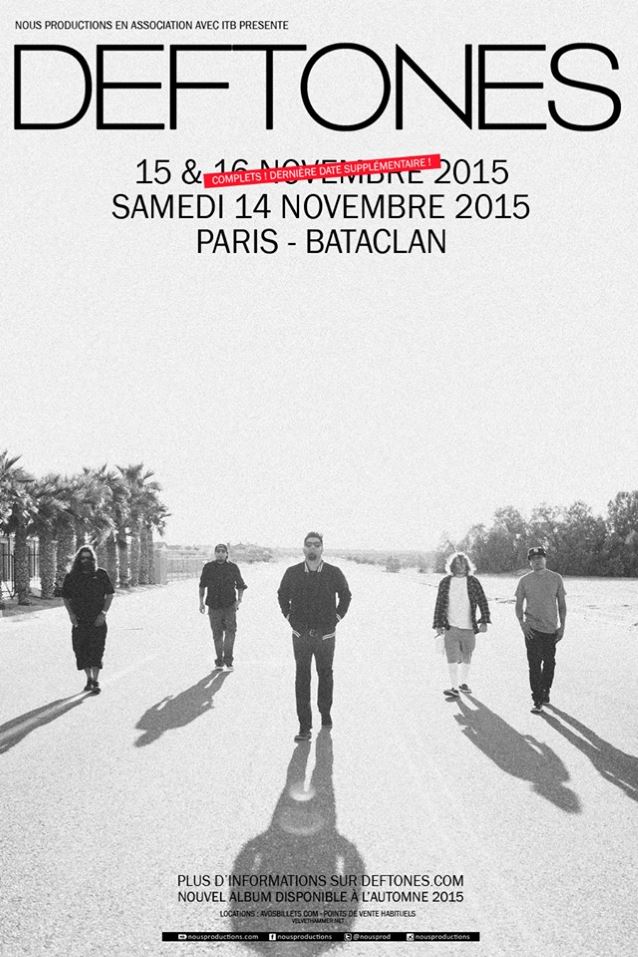