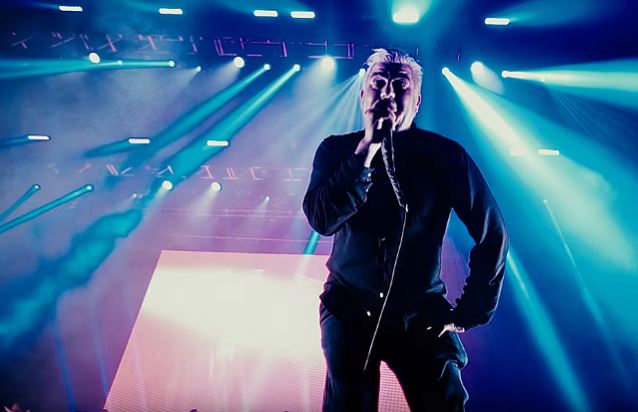 In May, California rock band DEFTONES made an exhilarating return to London, England's SEE Arena, Wembley. The show was originally plotted for last year but was derailed by a close brush with November's Paris terror attacks.

Having recently celebrated the 20th anniversary of its still-searing debut album "Adrenaline", DEFTONES frontman Chino Moreno spoke to FACT magazine about how everything and nothing has changed in two boundary-pushing decades.

"When we were initially supposed to play the show at Wembley, we were in Paris in November and we were scheduled to play the Bataclan the night after the terrorist attacks happened," Chino said.

"We've been definitely been impacted by what happened in Paris. Us as a band, we sort of just took a step back and we just sort of… I think we all wanted to kind of just be home at that moment.

"Music, to us, is one of the most innocent things, and for something like that to happen in that sort of place was just unexpected, I think, in a lot of ways, and it really caught a lot of people off guard."

Moreno also talked about how his attitude toward performing has changed over the years, particularly compared to the way he felt in the early days of DEFTONES.

"I think — at least for myself — I feel like I appreciate this a lot more now, and I feel like I owe it to my bandmembers and myself, and especially the people that are paying… after all these years, that continually come see us and support us, we need to be good, and we need to be great," he said.

DEFTONES is continuing to tour in support of its latest album, "Gore", which debuted at No. 2 on The Billboard 200, having shifted 71,000 equivalent album units in the week ending April 14. It was the band's highest-charting effort since their self-titled fourth album bowed and peaked at No. 2 in 2003.