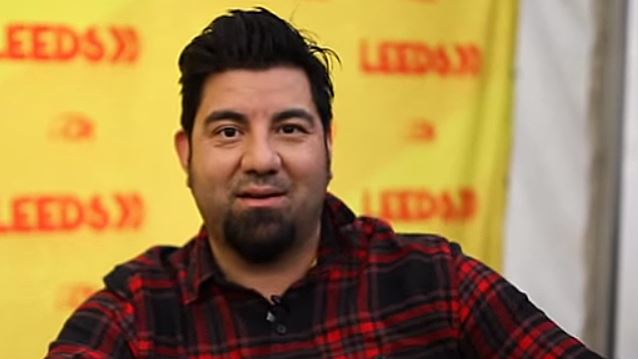 DEFTONES singer Chino Moreno spoke to RollingStone.com about the progress of the recording sessions for the band's follow-up to 2012's "Koi No Yokan", tentatively due this fall.

"The songs are amazing, and we wrote them in a really cool way," he said. "We had all of us in a room together with one person expressing an idea and another person jumping on it. The songs are really built as a collective. We have five guys who have almost completely different takes on music, so when it works, it works great."

According to Moreno, sixteen songs have been written for the new album, which is once again being produced by Matt Hyde (SLAYER, CHILDREN OF BODOM, MONSTER MAGNET, WINDS OF PLAGUE).

DEFTONES are scheduled to be done recording the new album by the end of March.

Moreno said in 2013 that he believes that the band should and will release "Eros", the album it recorded before bassist Chi Cheng was left in a semi-comatose state by a car accident in November 2008. Although Moreno was not sure if the disc would ever surface, his feelings have changed since Cheng's death.