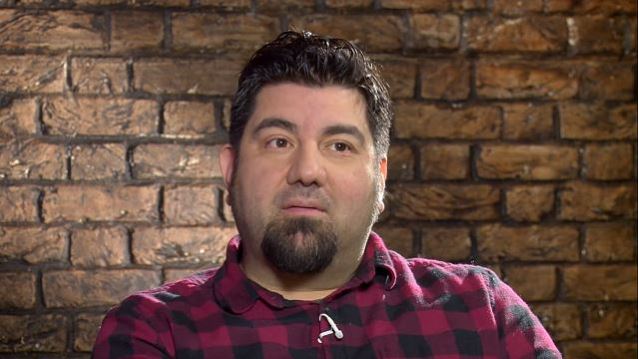 Jon Mahon of Scuzz TV recently conducted an interview with DEFTONES frontman Chino Moreno. You can now watch the chat below.

Speaking about the musical direction of DEFTONES' upcoming album, "Gore", Moreno said: "It's hard to explain. I mean, it's not any one thing. I think it's very DEFTONES-esque in that way. But the way a lot of the songs came about was… I have to say that I did a lot of the writing on this record — Sergio [Vega, bass] and myself, as far as initiating some of the initial ideas of the songs. Stephen [Carpenter, guitar] is very present on the record as well, but he is more of the aggressor, I guess, or he writes more of the aggressive stuff. I was actually the aggressor when it came to what songs we were gonna use. And that wasn't really, really by choice. I enjoy writing songs. Although once Stephen sort of joined into the process, it definitely escalated. And I think that our best songs are when it's a really collaborative record."

"Gore" is due on April 8 via Warner Bros. Records. DEFTONES has released a new track from it, "Doomed User", which is now available for purchase via all digital retailers after premiering on SiriusXM's Octane channel. "It's got a rockin' rhythm and a high tech sound that will make you shake your body down to the ground," Moreno said. The album's current single, "Prayers/Triangles", is climbing the rock radio charts.

DEFTONES made the rounds at this year's SXSW in Austin, headlining both Spin's 14th annual day party at Stubb's and an impromptu show at SXSW's outdoor stage at Lady Bird Lake for over 15,000 fans.

DEFTONES will perform on the April 12 edition of ABC-TV's "Jimmy Kimmel Live!"