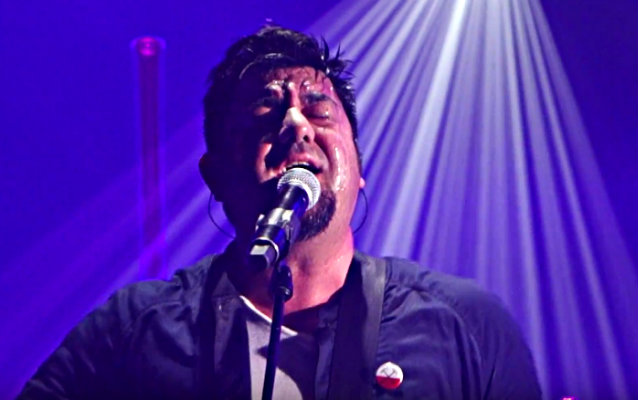 Chino Moreno says that DEFTONES "made a very conscious choice" of which bands they would tour with earlier in their career in order to avoid being lumped in the so-called "nu metal" genre in the mid-'90s to the early 2000s.

Essentially a fusion of rap and alternative rock (arguably born out of RAGE AGAINST THE MACHINE), nu metal inexplicably swept the airwaves and peaked for a brief period in the late '90s and early 2000s, with Gregory Heaney of AllMusic describing the genre as "one of metal's more unfortunate pushes into the mainstream." Along the way, several bands associated with nu metal, including DEFTONES, KORN and SLIPKNOT, took a somewhat defensive stance against being labeled as such. Even those less apologetic nu metal groups eventually changed their sound, effectively disowning the genre that they helped pioneer.

Speaking to Metal Hammer magazine for an article focusing on the upcoming twentieth anniversary of DEFTONES' "Around The Fur" album, guitarist Stephen Carpenter said that his band wasn't particularly bothered by the various labels that were attached to the group's sound. "We didn't really pay much attention to that," he said. "I remember when these subgenre names didn't exist. It was just metal. So I don't think we made a decision to step away from it — we've never paid attention to what anyone else was doing. We just did what we thought was right, and tried to make a killer album."

Moreno, however, admitted that DEFTONES carefully selected their touring partners during the group's early years in an attempt to forge their own musical path. "We did make a very conscious choice of who we were going to play shows with," he said. "It was hard to be this young band and having to turn down tours. I can't remember how many times I turned down KORN! And they got pissed at us. Jonathan [Davis, KORN singer] would say, 'Why do you hate us?' and I didn't know what to say. I'd tell him, 'Dude, I don't hate you. I love you, guys. You're my friends. But I don't want to tour with you. I don't want to be on the 'Family Values' with you and LIMP BIZKIT.' The name of the genre was nu metal, so anything that is new is one day going to be old. And I didn't to be old with it."

KORN guitarist Brian "Head" Welch recently told Metal-Heads.de that while he still considers DEFTONES to be his friends, "We're not close with 'em. They just like to do their own thing. We would like to tour with 'em again one day, but I don't think they want to, so… But it's all good. When we see 'em, we just don't talk about touring. We're just, 'Hey, bro. How's the family?' Stuff like that."

DEFTONES is continuing to tour in support of its latest disc, 2016's "Gore", which debuted at No. 2 on The Billboard 200 with first-week sales of 71,000 equivalent album units. It was the band's highest-charting effort since their self-titled fourth album bowed and peaked at No. 2 in 2003.