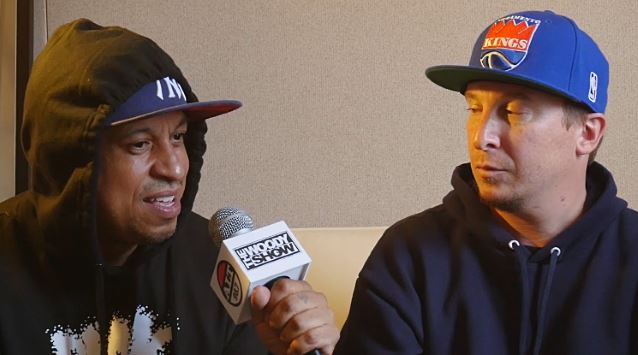 "The Woody Show", which airs on the Los Angeles radio station ALT 98.7 KYSR, conducted an interview with DEFTONES drummer Abe Cunningham and bassist Sergio Vega at the Rock In Rio USA festival on May 9 in Las Vegas, Nevada. You can now watch the chat below.

Speaking about the progress of the recording sessions for DEFTONES' follow-up to 2012's "Koi No Yokan" album, Sergio said: "Yeah, we started working on it about a year ago. We had like a real dense five-year run from [2010's] 'Diamond Eyes' through 'Koi' and touring a lot, being around each other a lot. And we just found a different way to approach this record, where we would get on a couple of weeks, play a couple of shows, go home for a couple of weeks, and found this different way that was a little more balanced. And also because of all of the buildup and all of the momentum we have had, like really fruitful, so we have a lot of material. We're super excited on it. And we've gotta get it done and get it out there. We're super stoked to share that at some point."

As previously reported, DEFTONES has tapped Jerry Cantrell (ALICE IN CHAINS) to lay down a guest guitar solo on the band's forthcoming album, tentatively due in September.

Singer Chino Moreno recently told RollingStone.com about the DEFTONES' next CD: "The songs are amazing, and we wrote them in a really cool way. We had all of us in a room together with one person expressing an idea and another person jumping on it. The songs are really built as a collective. We have five guys who have almost completely different takes on music, so when it works, it works great."