Reunited Oakland, California thrashers DEFIANCE have finally completed all the basic tracks for the 11 songs that will appear on their first album in over 15 years. According to the band, "All that is left are some vocals and guitar leads for the last four tunes we recorded at the end of 2008 at Trident Studios [in Pacheco, California]."

The group added, "We are going to have a special guest on the album too. Glen Alvelais [FORBIDDEN, TENET, TESTAMENT] has offered to help us by busting out some sick leads to help fill the void left by Doug [Harrington, late DEFIANCE guitarist who passed away in 2006]. We are stoked to have him on our album, and we truly appreciate it."

Regarding the recording process for the new DEFIANCE album, vocalist Steev Esquivel (also of SKINLAB) stated, "Everything is sounding bad-ass, and [it's] sure to be one of the best thrash albums to come out in a while. The guys have really fuckin' outdone themselves this time. What was meant to be some friends having fun and paying tribute to our fallen brother Doug Harrington has completly turned into a monster that none of us even knew it would turn into. Lots of thrash and tons of screaming!!"

He continued, "Vocals for the first six songs are 95% done and recorded. The end of the recording process is near and sounding fuckin' killer at that. Juan [Urteaga, producer] should be throwing some mixes together here very soon, as were shooting for a mid-2009 release."

DEFIANCE recently posted a new song, entitled "The Voice", on its MySpace page. The track is a rough mix from the group's sessions at Trident Studios. Along with the new album, DEFIANCE is also working on putting together a DVD, tentatively titled "Decade(s) of Defiance", that will chronicle the band's entire career from 1985 to the present.

Part of the so-called "second wave" of Bay Area thrash (which also included the likes of FORBIDDEN, VIO-LENCE, DEATH ANGEL, and TESTAMENT), DEFIANCE officially disbanded in 1993 after the departure of vocalist Steev Esquivel (who would go on to form SKINLAB, and later RE:IGNITION), while the remaining members, with the addition of vocalist Dave Godfrey White (HEATHEN), formed INNER THRESHOLD, which would also eventually disband.

In 2005, rumors of a reformed DEFIANCE sent waves of interest through the burgeoning thrash metal community until it was finally confirmed that the band had in fact reunited and were at work on their first new material in over a decade.

Metal Mind Productions released "Insomnia", a three-CD digipack containing remastered versions of the following DEFIANCE albums: 1989's "Product of Society", 1990's "Void Terra Firma", and 1992's "Beyond Recognition". This special collector's edition includes classic material from Roadrunner Records' archives, digitally remastered using 24-bit technology and released on golden discs. The three-CD digipack edition is limited to a hand-numbered 2,000 copies and contains a 28-page booklet with lyrics to all songs, full story of the band, and over 20 bonus tracks taken from the band's archives. 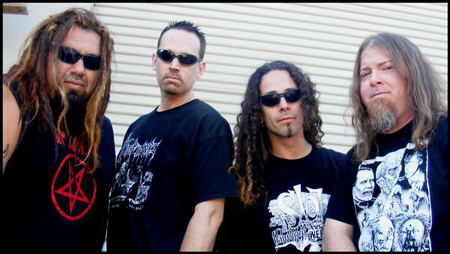