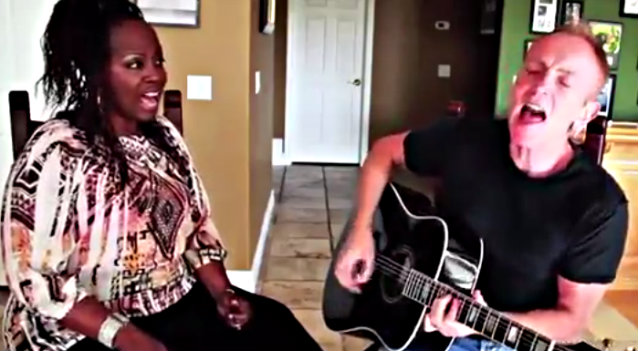 Video footage of DEF LEPPARD guitarist and MANRAZE frontman Phil Collen talking to Artisan News about DELTA DEEP, his " extreme blues project" with singer Debbi Blackwell-Cook, can be seen below.

DELTA DEEP debuted three songs at the LA Radio Studio during an appearance on the "Radio Screamer" show. Check out video footage below.

Collen previously stated about DELTA DEEP: "It is Debbi Blackwell-Cook, who sang on 'Take On The World' and she is on the new MANRAZE single. She's got this amazing voice, a cross between Tina Turner and Chaka Khan, this incredible powerful voice.

"We're doing this blues album, Paul Cook's on one of the tracks.

"I'm constantly writing, and I'll be with DEF LEPPARD and think that won't work for DEF LEPPARD, but it might go in MANRAZE, but now I've got a third outlet.

"I had an injury on my tendon, and I couldn't really play guitar, so I learned to play slide.

"You have to do whatever you can when it appears; when inspiration rears its heads, you have to take advantage of that. I think when you don't do that, you miss a golden opportunity. For me, there's this great artistic fulfilment in writing and working on songs."