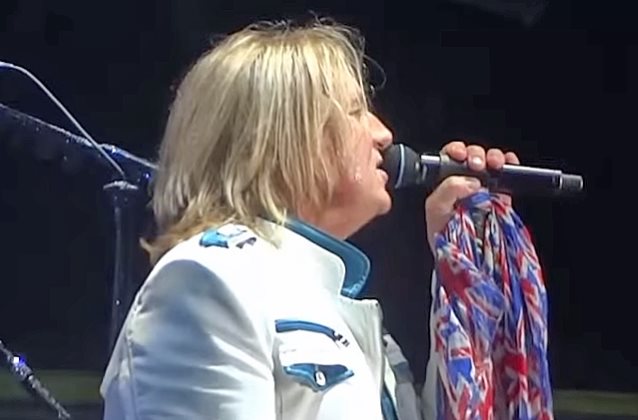 DEF LEPPARD was forced to postpone the last ten dates of its tour with STYX and TESLA due to LEPPARD frontman Joe Elliott suffering from vocal issues. Speaking to Italy's Linea Rock on Tuesday (February 2), DEF LEPPARD guitarist Vivian Campbell said: "Joe has been having some problems with his voice, and he saw two different doctors. The first one told him that he could continue to tour. The second doctor he saw just this past Saturday afternoon, the afternoon of a show we were supposed to play in Orlando, Florida. And he went to see a specialist. And they put a camera in his throat to see what was going on. And of the two vocal cords, one wasn't moving at all. So this specialist that he saw on Saturday told Joe that if he didn't stop singing immediately for a couple of months, he would do irreparable damage in the long term. But he's also equally confident that if Joe just stops singing for at least two months that it will naturally heal. So he doesn't have to do any surgery, he doesn't have to take any drugs, he just needs to rest. So we had to postpone those shows and we're trying to reschedule them for May."

A while back, Joe Elliott told The Pulse Of Radio that there's nothing more important than staying healthy on the road, and explained how he preps strenuously before each and every one of the band's tours. "I've seen a lot of people start a tour out, and then three days into the tour have to cancel at least a couple of gigs 'cause they've blown their voice out," he said. "So what I try and do is make the first gig we do actually the 20th that my body's done, and I have my blowout 17 days before the tour starts. It's a muscle. You've just got to stretch it and get it into shape."

Last October, DEF LEPPARD released its eleventh album, titled "Def Leppard", which peaked at No. 10 on The Billboard 200 album chart.