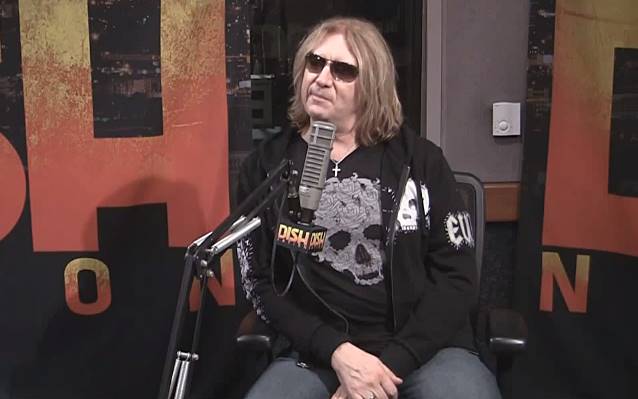 DEF LEPPARD singer Joe Elliott was interviewed on this morning's (Tuesday, March 18) edition of "The Heidi & Frank Show" on KLOS 95.5 FM radio station in Los Angeles, California. You can now watch video footage of his appearance below.

As previously reported, DEF LEPPARD and KISS have announced one of the hottest double bills of the summer, with the bands joining forces to hit both arenas and sheds all over North America. The tour kicks off on June 23 in West Valley, Utah at the USANA Amphitheater and winds down on August 31 in Woodlands, Texas at Cynthia Woods Mitchell Pavilion.

"'Bout two years ago, myself and Gene [Simmons] did a little tour of South America, under the guise of the ROCK N' ROLL ALL STARS — a bunch of guys from GUNS N' ROSES and BILLY IDOL, and what have you. And other than trying to out-do each other with obscure British bands like the IDLE RACE and the PINK FAIRIES — who knew each band better — we discussed doing this as well; that one day DEF LEPPARD and KISS would tread the boards together, as it were, and it's finally happened, which is fantastic."

DEF LEPPARD released a Deluxe Edition of its 1996 classic album "Slang" across multiple formats through its own Bludgeon Riffola label on February 10.