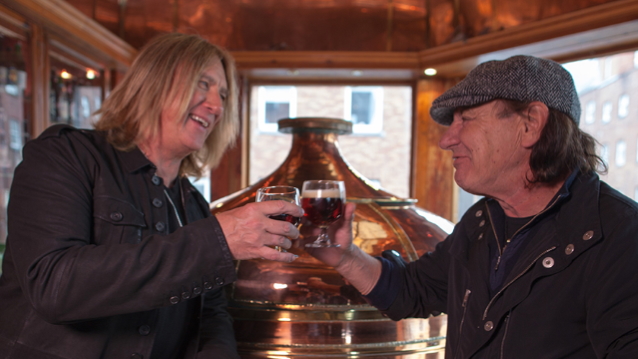 Legendary AC/DC singer Brian Johnson heads to Dublin to meet DEF LEPPARD frontman Joe Elliott on the AXS TV series "Brian Johnson's A Life On The Road", premiering this Sunday, October 6 at 9 p.m. ET/6 p.m. PT. During their conversation, Elliott reflects on DEF LEPPARD's "Pyromania" and "Hysteria" tours, as well as the tragedies that befell them along the way and more.

In the first-look clip below, Elliott and Johnson discuss the importance of playing their greatest hits in concert.

<"I have no problem playing the hits on stage," said Elliott. "When I go and see THE [ROLLING] STONES or [Paul] McCartney, I'm not really bothered about hearing 'Flowers In The Dirt', I wanna hear 'Eleanor Rigby'. It's like if you didn't play anything off 'Back In Black', there'd be a riot. If we don't play things off 'Hysteria', we are pleasing the one percent that criticize it. I've always said, and I'll say it a million more times before I die, no doubt, if you can't handle the responsibility of writing a hit, don't write it.

"It's not an education center when you come to see a big band. It's a place — I don't want to sound pretentious when I say a place of worship — but you're coming to celebrate what you know. And part of going to see AC/DC, DEF LEPPARD, U2, DURAN DURAN, IRON MAIDEN, doesn't matter who it is, is to hear all the stuff that you saw on MTV, or that you heard as a kid."

"Brian Johnson's A Life On The Road" airs Sundays at 9 p.m. ET on AXS TV. The globe-trotting music series finds the rocker going above and abroad to catch up with a slate of fellow icons, hearing their priceless stories from their time on tour and taking viewers to the places that helped define their legendary careers.

Next Sunday, October 13, Johnson heads to San Rafael, California, to meet METALLICA drummer Lars Ulrich, who shares candid stories from his band's legendary "Wherever We May Roam" tour and more.