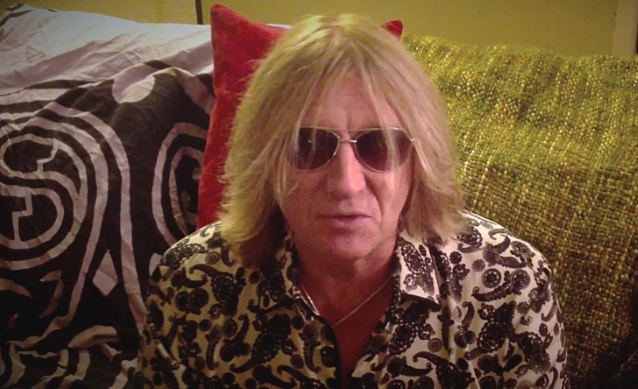 DEF LEPPARD singer Joe Elliott was recently interviewed by the 100.7 WZXL radio station in Atlantic City, New Jersey. You can now listen to the chat using the SoundCloud widget below. A couple of excerpts from the chat follow (transcribed by BLABBERMOUTH.NET).

On introducing KISS with the legendary battle cry of "You wanted the best, you got the best. The hottest band in the world... KISS!!!" prior to their July 26 performance in Holmdel, New Jersey:

Elliott: "I'd been threatening to do it for the whole tour. And we got to the last night before a five-day break. And I thought, if this is one of the things that are gonna rip my throat out, I'll wait until I've got five days to recover.

"I was so aware of what 'Kiss Alive II' was.

"[I went up to KISS and told them] 'I'm gonna introduce you guys, tonight.' So I went over there knowing one of their techs was there. And he just gave me the mic.

"I heard that somebody yesterday, apparently, downloaded it off some station. They played my intro and then they played 'Detroit Rock City' straight afterwards. [laughs]"

"As you can see [in the video that was posted online], I punched the air after I did it."

Elliott: "Well, you know, it's an ongoing situation. I won't say every single day of his life he's comfortable, but what's making him mentally comfortable is being out on the road with the band doing this rather than sitting at home twiddling his thumbs, going, 'I've got cancer. I've got cancer.' He's out there working. It's as mental as it is physical for Vivian. He was having treatment yesterday. But I spoke to his wife this morning and she said he's feeling a lot better today. We don't do a gig 'till tomorrow night, so he should be in good shape. He's only had one really bad night here, and that was in L.A. following an enormous bout of chemo. And it was really hard for him, but he still got up on stage and did his job. And most nights, he's been amazing, and he gets stronger and stronger each time. And he's working his way through this specific treatment that he's got, which was all thumbs up from his doctor, so he could do this tour. So then in September, he goes in for a stem-cell surgery, which hopefully will put this thing to bed once and for all."

On whether DEF LEPPARD's current tourmates KISS have paid much attention to the online controversy surrounding their induction into the Rock And Roll Hall Of Fame:

Elliott: "I don't think they take any notice of it. I mean, look, the Internet is just a forum for negativity. People very rarely spend hours and hours writing little comments underneath an article that's positive. It's all, like, 'Oh, these guys suck,' or 'Blah blah blah,' because they're anonymous, so they can say stuff. And you tend to just ignore it, which is what I'm sure KISS are doing.

"I was asked all the questions before the tour started about my opinion on KISS and the Rock And Roll Hall Of Fame, and I said, 'Look, I don't have an opinion. I'm not in KISS. It's not my business.' But the fact that a band as 'mom's apple pie' as LYNYRD SKYNYRD was seven nominations before they were accepted, I find the whole Rock And Roll Hall Of Fame thing absolutely a waste of space. And I hope they never ask us to be in it, 'cause I wouldn't wanna go anyway.

"But when it comes to backstage at the KISS thing, they're all loving this, because [current KISS guitarist] Tommy Thayer is a phenomenal guitar player, and [current KISS drummer] Eric Singer is a great drummer. And the songs have never sounded as good live, as far as I'm concerned. With all due respect to [original KISS members] Peter Criss and Ace Frehley, it seems to be a happier camp [now].

"I've seen some people say that [Tommy and Eric] don't deserve to be able to wear the ['Spaceman' and 'Catman'] makeup. Well, KISS is a franchise as much as a band, or a brand and a band, and if that's what it takes to sell the band, that they wear the same makeup…

"Sometimes when in Vegas, in Cirque Du Soleil, if a certain character wears a certain mask and he gets sick, one of the chorus line comes in and takes over wearing the same makeup.

"[KISS fans who continue to complain about the current KISS lineup should] move on. If you like the songs, and you've got Gene [Simmons] and Paul [Stanley], which were always, in fairness, the two most out-front members of KISS anyway, I think it still works."