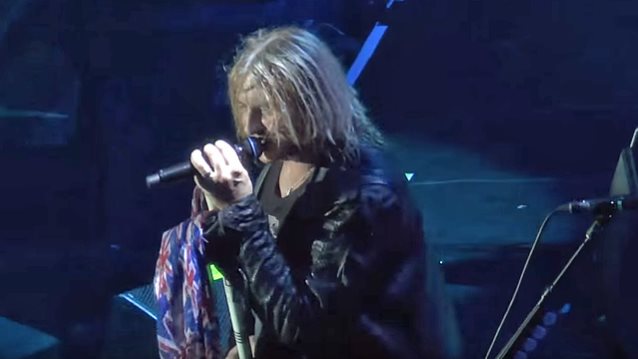 DEF LEPPARD has postponed the remaining dates on its current tour to give singer Joe Elliott time to rest his vocal cords. The band wrote on its web site that the concerts on its winter tour were being postponed "due to illness. All shows from Feb. 2 (San Antonio, Texas) through Feb. 17 (Allentown, Penn.) will be rescheduled, including the previously postponed dates in Greensboro, NC (Jan. 27), and Orlando, Fla (Jan. 30)."

Drummer Rick Allen offered more detail on Twitter, explaining that "the doctor basically said that if Joe continues to sing without resting his throat for a month, he might do permanent damage."

Las week, Elliott was forced to miss a band performance on DEF LEPPARD's "Hysteria On The High Seas" cruise because he was suffering from vocal issues. His bandmates Phil Collen and Vivian Campbell, along with LAST IN LINE's Andrew Freeman, MR. BIG's Eric Martin and Kip Winger, stepped in to cover for him.

"Def Leppard" was made available through earMUSIC worldwide (excluding North America, Japan) in the following formats: CD, 2LP gatefold, digital download and on all streaming services.

The album entered The Billboard 200 chart at position No. 10 with first-week sales of just over 30,000 units — nearly all from pure album sales.

The Doctor basically said that if Joe continues to sing without resting his throat for a month he might do permanent damage.. ???