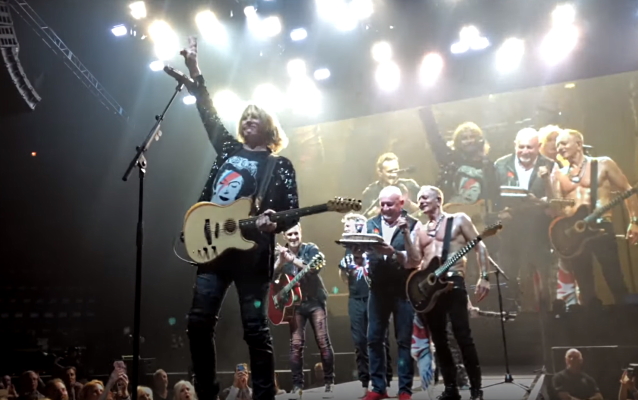 Asked in a recent interview with the Toronto Press what has been the key to DEF LEPPARD's success. Joe said: "This band formed in August 1977. When me, Steve Clark, Rick Savage and Pete Willis got together, we just thought we'd give it a go and see what happens. We liked what we saw when we watched 'Top Of The Pops' on TV, and we liked what we saw when we went to see bands play live and we wanted to be part of it. We learnt along the way that you don't get gifted with this. You might be born with a musical talent, but you have to apply that gift. We learnt a long, long, long time ago that it's hard work that gets you anywhere. Of course you need talent, too — that goes without saying. Then you need a mighty slice of luck to be in the right place at the right time. If you got the songs and you get the breakthrough, it's even harder work to try and retain that success or achieve it all over again. For us, we worked very, very hard to be the band that we became."

Pressed about whether he can recall the moment where he looked at the rest of the members of DEF LEPPARD and said, "You know what, I think we've made it," Elliott said: "I think there have been moments where I can look back and think we made an impression and that would have been late spring, early summer of 1983. During that period in Canada and America, we landed big with 'Pyromania'. All of a sudden, we were in Canada for the first time ever playing places like London, Ontario. I remember we were playing one place and it was so hot in the arena that a cloud had formed in the roof of the building. But it was exciting. That year, 1983, was kind of a marquee period for the band, especially in America and Canada. But I still didn't think of ourselves as 'making it' though, because the world is such a big place. Everyone's perception of 'making it' differs. When did Bob Dylan 'make it'? It's a subjective situation. For us, we never worried about that."