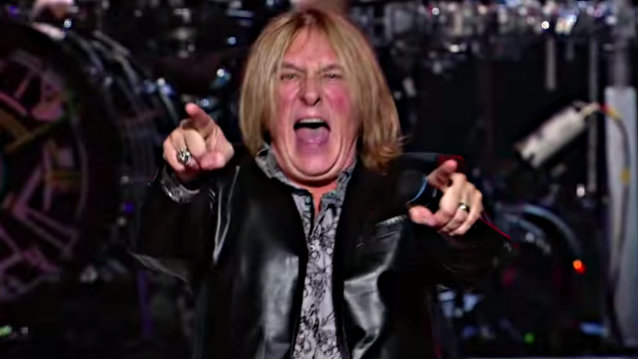 DEF LEPPARD has resumed work on its new studio album for a tentative mid-2015 release. The band's lead singer, Joe Elliott, tells BelfastTelegraph.co.uk: "We're back on it now and hoping to get it finished by early spring. I was in the studio last night, actually, and I'll be in again tonight, if I don't wear my voice out."

"He's just out of hospital," the singer said. "He had stem cell surgery and he's home about 48 hours. From what I gather, it all went really, really well. He has to stay away from pretty much everything, especially people, because his immune system's going to be zero right now. But we don't start work again until April, and he's done all his stuff for the album, so it's a good time for him to recuperate and get his strength back together."

DEF LEPPARD guitarist Phil Collen recently told Shor Bazaar about the progress of the songwriting and recording sessions for the band's new studio album: "This was really amazing, actually, [because] we are [usually] very slow at recording.

"This February, I went over to Joe's house in Dublin, to his studio, and was gonna write a couple of songs. Well, we got 12 songs started, so that was really rare for us. We went back a few months later, in May, and got 15, so they're really in good shape. And they're very varied."

He continued: "You let other things influence you, but you still retain your integrity and your sound, if you like. So we feel that we've done that. These songs are a cross section; some of them are really heavy and very melodic, and then some are just very different, but you can still tell it's DEF LEPPARD."