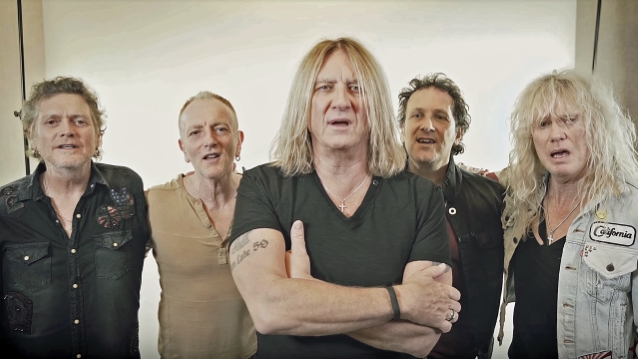 DEF LEPPARD has released an official music video for its new Christmas single titled "We All Need Christmas". A delicate acoustic ballad, the track proves fireside-ready with its uplifting, hopeful spirit and sense of seasonal soul.

"We All Need Christmas" is featured on DEF LEPPARD's brand new greatest-hits collection titled "The Story So Far - The Best Of", which was released on November 30. It is available in multiple configurations: a 2-CD set comprised of 35 tracks, 1-CD set comprised of 17 tracks, 2-LP vinyl, and digital. Among a blockbuster tracklisting loaded with timeless smashes, all four versions feature three new songs, including "We All Need Christmas", "Personal Jesus" and "Rock On (Remix)". As a bonus for collectors, the first-pressing vinyl copies of "The Story So Far" feature an exclusive seven-inch single of "Personal Jesus" and "We All Need Christmas".

As previously reported, DEF LEPPARD will be inducted into the Rock And Roll Hall Of Fame next spring. The honor comes after the British rockers got the most votes in the Rock Hall's online fan poll.