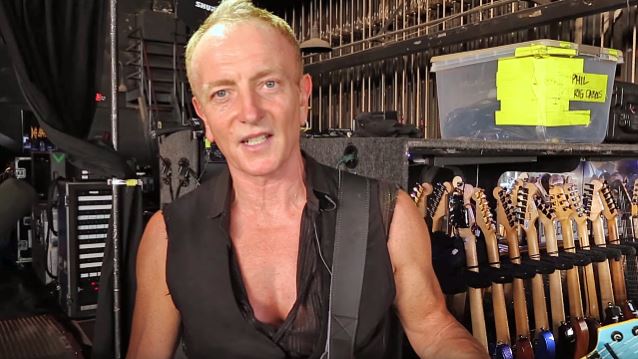 Jackson recently hooked up with DEF LEPPARD guitarist Phil Collen for a backstage look at his current touring rig. Watch as Collen shows off some of his favorite Jackson axes, and also explains how a few of them got their names.

Collen gave a frank state of the music union to The Washington Times, explaining that the old music business is nothing like the one bands are facing now. The guitarist offered up a bit of advice to young musicians coming up now, saying: "Don't do this if you're just [out for] fame or money because it very rarely happens. The reward should be the artistic expression. Their motivation for doing it is usually narcissistic. It's usually 'I want to be on YouTube; please recognize me.' As opposed to when we started. A lot of other artists like Prince would just be writing songs, and he wouldn't really care [if they found an audience]. That doesn't really happen now."

He went on to explain that touring has been just as mainlined as all the other parts of the rock world. "Because of the decline of the record industry, obviously touring is way more important," he said. "There's two promoters basically: There's AEG and Live Nation. Before you'd have all these independent promoters around the country [and] you could do it independently. That isn't [the case] anymore."

In all, Collen is proud that over 35 years after releasing their debut album, DEF LEPPARD remains a red-hot arena act. "The fact that we don't have a major label and we're still succeeding despite that means more," he said. "I'm proud of the fact that we have integrity; we never split up. A lot of these venues we play are the same venues we've been playing for 30-odd years. We've always been busy."

Collen told The Pulse Of Radio he and his bandmates always look forward to playing their hits out on the road. "Every night when someone's singing along — especially when there's a lot of young kids there, 16-year-olds and that — it is fresh, actually makes you feel really good when there's a whole new breed of people just singing away to songs that you've done," he said. "It doesn't really matter whether it's a new song or an old song, it's still our song, so it's a huge compliment. It really is, it's the best thing in the world."