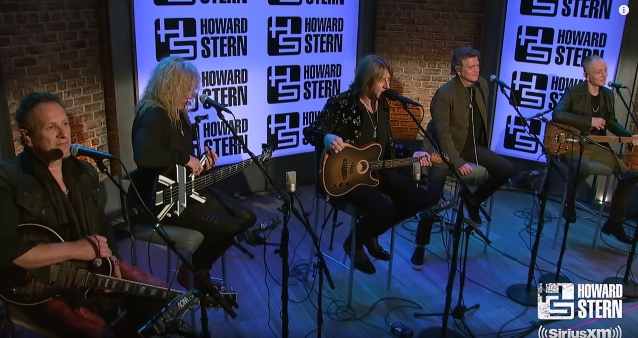 DEF LEPPARD took part in a live interview and acoustic performance on yesterday's (Tuesday, March 26) edition of "The Howard Stern Show" on SiriusXM. Check out video footage below.

DEF LEPPARD will be inducted into the Rock And Roll Hall Of Fame on March 29 at Brooklyn, New York's Barclays Center.

Frontman Joe Elliott told The Pulse Of Radio he completely credits DEF LEPPARD's legion of fans for the honor. "We are — and always have been — the odd one out, if you like, because the kind of band we've been portrayed as for the last however many decades, has always been one that's like, 'Yeah, they sell a lot of records, but they're not cool,'" he said. "But it looks like a different dynamic the way the band's been reassessed recently. And the important thing is, this is really been swung by our fans, more than anybody else. It's not some committee of people we don't know deciding whether we're valid, or not. The fans pretty much told them that we are."

In addition to DEF LEPPARD, who will be inducted by QUEEN's Brian May, the 34th annual Rock And Roll Hall Of Fame class will include Stevie Nicks, THE ZOMBIES, Janet Jackson, THE CURE, RADIOHEAD and ROXY MUSIC.

The 2019 nominees had to release their first recording no later than 1993.