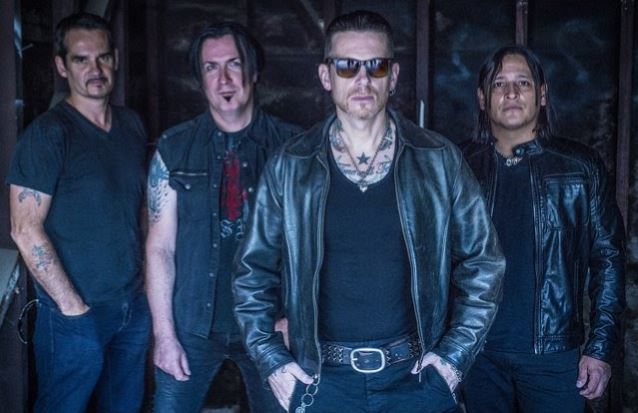 Ricky Warwick has been a very busy man! Over the past year, he has co-written and recorded the second album for BLACK STAR RIDERS (the UK top 20 album "The Killer Instinct") and toured extensively to support that release. In addition, he has recorded not one but two (!) new solo albums! These albums will be released February 26, 2016 through Nuclear Blast Entertainment.

Ricky explains: "While we were working on the new BLACK STAR RIDERS album, I just got into a very productive song writing zone. The songs just kept coming and coming."

Ricky writes songs in a number of styles, and many of these tracks would not be at home on a BLACK STAR RIDERS album. So, he decided to record and release these albums as solo projects. Ricky continues: "BLACK STAR RIDERS is my top priority. But I really wanted these songs to come out.

"The album's been a long time coming, and, in fact, we've even made two albums here; electric and acoustic.

"We've played with some great musicians on this album.

"I'm excited to be on Nuclear Blast. They've looked after us really well with BLACK STAR RIDERS.

"I think that the BLACK STAR RIDERS fans will really dig this solo stuff too so absolutely delighted to be getting it out there."

The first of these two albums is titled "When Patsy Cline Was Crazy (And Guy Mitchell Sang The Blues)". The second is an acoustic album called "Hearts On Trees". Both albums will be bundled together in a special package and released as a double CD.

Ricky co-wrote almost all of the songs on this double album with his friend Sam Robinson and there's a very personal feel to both albums.

BLACK STAR RIDERS fans may notice an immediate connection with the catchy hooks on the more hard-rock centered "When Patsy Cline Was Crazy....", but the more stripped back acoustic album "Hearts On Trees" shows a more tender side to Ricky's abilities and the powerful lyrics really hold their own. Lyrical themes on this record range from war to religion to relationship regrets with many of the tracks about Northern Ireland where he was born and raised. The acoustic tracks are by no means simplistic musically, however, with guitar melodies ranging from Celtic folk sounds to broody blues riffs and even more psychedelic fuzzy styles, there's lots of diversity.

When the conversation changed to possibly doing some touring to support this release, Ricky was on board. But he wanted to have a full band to bring these great songs to fruition on the stage. So, he contacted some of the amazing musicians he has befriended over the years and virtually overnight THE FIGHTING HEARTS were born. Tapping his old bandmate Gary Sullivan from one of his post-ALMIGHTY bands (SIC) to play the drums was a no-brainer. Gary had recorded all the drums on the "Patsy Cline" record and is an extremely talented musician. Next up was a call to his BLACK STAR RIDERS bandmate bassist Robbie Crane. Robbie was thrilled to be a part of it. Guitarist Mark Gemini Thwaite completed the lineup. Having previously played for such luminaries as THE MISSION and Peter Murphy, Mark added that special something that made the whole band gel.

To kick things off, RICKY WARWICK & THE FIGHTING HEARTS will be supporting Belfast's own favourite sons STIFF LITTLE FINGERS on their U.K. tour in February/March of 2016.

Ricky comments: "To be going on tour with STIFF LITTLE FINGERS is a dream come true for me, 'cos they're my childhood heroes so I just can't wait to get out there."