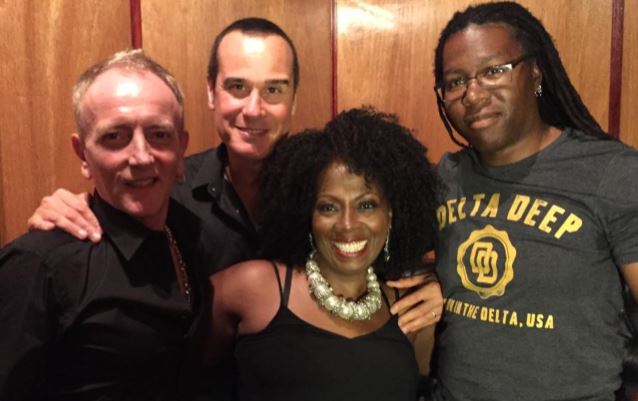 The official lyric video for "Take Me Home For Christmas", an original Christmas song from DELTA DEEP, the "extreme blues project" featuring DEF LEPPARD guitarist and MANRAZE frontman Phil Collen and singer Debbi Blackwell-Cook, can be seen below. The track will be released on November 27 and is available for pre-order now at iTunes.

"DELTA DEEP has this great Christmas song reminiscent of the 1940s jazz era," Collen tells Ultimate Classic Rock. "We didn't plan it that way, but that's just how the song came out. We love it because it's not like your traditional Christmas song. It's a track that can literally be played year round simply because it's mellow and full of that smoky blues sound that's a part of all of us."

He continues: "I've never really been an advocate of Christmas songs due to the over-commercialized, seasonal onslaught that happens each year. However, with this tune, we managed to evoke not only feelings of cheerful warmth and visions of cozy fireplaces. We loved creating something reminiscent of a 1940s bluesy jazz style, easily to be enjoyed no matter what the season. I even used my 1954 Gibson ES-175 for that very classic sound."

Collen initially started DELTA DEEP in 2012 after jamming over the course of a year with friend and relative Debbi Blackwell-Cook. What started as a casual pairing singing Motown and classic blues staples quickly became a quartet who share a love for soul, funk and the blues when they added STP's DeLeo and drummer Forrest Robinson.