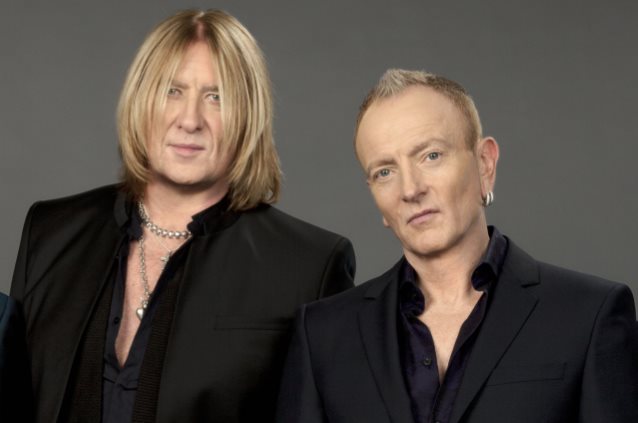 Brian Casey of the "Maximum Music Morning Show" on Max 93.5 FM in Indianapolis, Indiana, conducted an interview with DEF LEPPARD guitarist Phil Collen. You can listen to the full chat via the SoundCloud widget below. A few excerpts follow (transcribed by BLABBERMOUTH.NET).

Phil: "[It's going] phenomenal. The audience is just loving it. It's three bands, it's the original members and stuff. It's not like karaoke or anything, it's like real integrity with all three bands. And every band's just trying their hardest and the audience is responding. Yeah, we're having a blast out here. It's great."

On how DEF LEPPARD has managed to persevere through various personal tragedies within the band:

Phil: "Staying as a family, really. Everyone dies and everyone has accidents, that's life, unfortunately. We're just a microcosm of just a regular band, really, we're just able to be a touring rock band. The longer you're together, the more stuff like that happens. You have to roll with it and just do our thing. We love being in a band, we love writing these songs, just getting out there and especially touring is just a blast, it's all we can do, really."

On working with guitarist Vivian Campbell, who joined DEF LEPPARD in 1992 after stints with DIO and WHITESNAKE:

Phil: "He's actually been in the band longer than [deceased guitarist] Steve [Clark] was. We obviously work great. We didn't really have auditions when Steve passed away. You don't replace a family member, so we didn't do that, we added Vivian to the band. That was the way we wanted to do it, we didn't want to replace someone. It's great, he's been a great addition so that all worked perfectly in that context."

On what Steve Clark, who passed away in 1991 due to alcohol poisoning, meant to DEF LEPPARD:

Phil: "He was my best friend. That was horrific, it was awful. Like I said, it's life and it happens, unfortunately."

On the song variety found on the band's new "And There Will Be A Next Time: Live From Detroit" DVD release:

Phil: "We continue to get better every time we go out on tour. The singing gets better, the playing gets better as well. For us, that's exciting as well. Even like these versions of the songs compared to ten or fifteen years ago when we recorded other things before you can hear a huge difference. That's the right trajectory; you got to keep getting better. It's really good."

On the status of his blues-inspired side project DELTA DEEP:

Phil: "We've got a live album coming out this year. Actually, there's probably a track within the next month going to surface, I would imagine, and then, after that, start working on our second studio album, which, again, the tough thing is getting the time to do that. You know, everyone is in other bands. You know, Robert DeLeo, who plays in STONE TEMPLE PILOTS, is the bass player. Debbie Blackwell-Cook's the singer and Forrest Robinson, who plays drums, and then me, I'm always touring. It's hard to find the time. So we'll just get like five days here and there and record like that. I like doing it that way anyway, so that's pretty exciting as well. And obviously with DEF LEPPARD, its non-ending. We're starting to work on some new music as well."

On the quality of the band's recent live performances:

Phil: "Like I said, we've got better. I've never heard Joe Elliott sing this well in my life. I mean, since we've been in the band, which for me, is 35 years. It's amazing, his voice. I'm thrilled about that and we've just got better as a band. So, we're promoting the live DVD, so most of the stuff off of that. And then you know obviously POISON and TESLA go down in an absolute storm. A lot of these dates sold out already. It's just been, audience reaction has just been ridiculous. So yeah, we're having a lot of fun out there."

On recreating the band's often complex and multi-layered studio production jobs in the live setting:

Phil: "You have to approach them slightly different. I'll give you a great story: We've done the song 'Love Bites', which we never played as a band. It was totally done in the studio. Mutt Lange, our producer, who was amazing, who was responsible for all of those great records and sounds and everything. We overdubbed like 160 voices and a million guitars and all of this stuff. Then the song went to number one in the Billboard charts and we'd never played it, so I was like, 'Oh, my God, we'd better rehearse this.' I remember it was in Vancouver, we got a little rehearsal room and we just played this song over and over and over again, and got a version of it. Obviously, you couldn't do 160 voices, so you do a three-part harmony with the four guys, and then the eight guitar parts, you kind of break that down into two, so you'd have to do some serious surgery on it, but it represented the whole thing, so you just choose the parts that are the most prominent. And when you do the songs, those are the ones that you hear and all the other stuff, people are singing along anyway, so you actually get away with it. So that's how you do it."

DEF LEPPARD kicked off its North American tour with POISON and TESLA on April 8 at the SNHU Arena in Manchester, New Hampshire. The trek will wrap on June 25 in Indianapolis, Indiana.