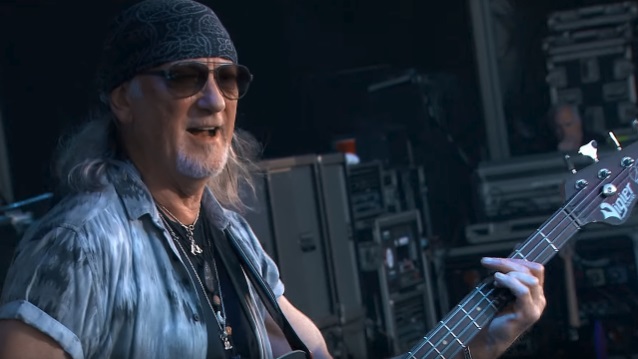 Morgan Richards Interviews recently had a chat with DEEP PURPLE bassist Roger Glover. You can now listen to the question-and-answer session below.

Asked about DEEP PURPLE's ongoing "The Long Goodbye Tour", which has fueled speculation that the band is planning to retire from the road after travelling the globe countless times over the course of a nearly five-decade career, Glover said: "It was never set in stone in as much as we couldn't give you a date [as to when we would play our final show]. But we know we're gonna end sometime in the next year or the year after. Who knows? But in our age — we're in our 70s now… If it's one person, then you can know, but when there's five of you and you all have a mixed bag of health concerns and reasons and whatever… So we really don't know. But as long as we're enjoying it, we'll try and keep going, yeah. But when [the time to call it quits will] be? How long is a piece of string?"

Regarding whether there are plans for DEEP PURPLE to record and release more new material after the arrival of the band's latest album, 2017's "inFinite", Glover said: "We don't plan. We just let things happen. I'd love to do another album, but we haven't booked studio time or thought about it much. We'll get into next year before we even start thinking about that."

Roger also talked about DEEP PURPLE finally getting inducted into the Rock And Roll Hall Of Fame as part of the class of 2016 after being eligible for two decades. He said: "It's not that special to us. I mean, it's special that people support us, yes — we're very thankful for that. And lots of people — from METALLICA to Alice Cooper to RUSH, lots of people — wondered why we weren't in there. Actually, we didn't get it twice [after we were nominated for induction] before we got it, and what do you answer that with? Well, it's not that important to us. And now that we've got it, it's still not that important to us. It hasn't changed my life in any way except I got a gong and a free mug. But it's a bit of icing on the cake. A friend of mine, when he was getting an award like that, said, 'The real reward for what you do is getting onstage and playing. Every night, that's the reward.' Something like a recognition like [the Rock Hall induction], it's just a little bit of icing on the cake — that's all. It's not that important."

The follow-up to 2013's "Now What?!", "inFinite" was tracked in February 2016 at a studio in Nashville, Tennessee and was once again helmed by Bob Ezrin, who has previously worked with KISS, PINK FLOYD, PETER GABRIEL, ALICE COOPER and KANSAS, among others.