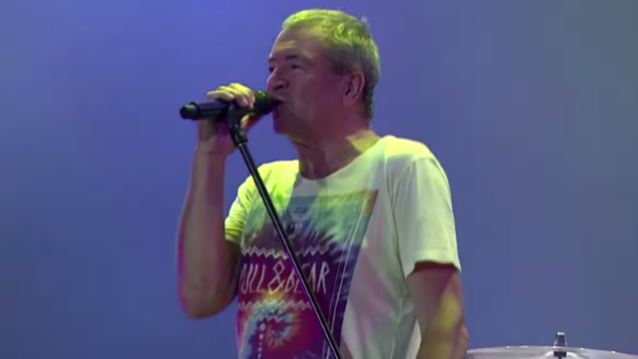 Singer Ian Gillan of legendary British hard rockers DEEP PURPLE — who have been eligible for induction into the Rock And Roll Hall Of Fame for two decades now — says the people who run the Hall Of Fame organization are "bloody arrogant and rude."

PURPLE was recently nominated for Hall Of Fame inclusion for a third time, having been passed over in both 2013 and 2014.

Gillan told Classic Rock: "I have no respect for them. They're the kind of people that having seen 'A Hard Day's Night' decided that THE MONKEES would be America's equivalent to THE BEATLES. They've no idea what goes on in the big, wide world outside of their self-arbitrating surroundings. To me, those people are bloody arrogant and rude."

He continued: "I've heard that somebody on their committee dismissed us as one-hit wonders. I couldn't figure out whether that hit was 'Hush', 'Kentucky Woman', 'Black Night', 'Strange Kind Of Woman', 'Child In Time', 'Perfect Strangers', 'Knocking At Your Back Door' or perhaps even 'Smoke On The Water'."

Gillan added: "I'm very grateful for the other bands and artists that stood up for us with a view to our induction — that's nice of them. But I wish that the Hall Of Fame had had the discretion to ask us first. It's now become a debate in which we are too late to have the final word."

Gillan claimed that he had no idea PURPLE had been nominated again and only found out when Classic Rock spoke to him.

He said: “I'm sure that my mum would have been pleased and it all sounds very grand, but just take a look at who's in it. I once wrote a song called 'No Laughing In Heaven' which was about not wanting to go to heaven due to the company I'd be keeping, and with a few exceptions, the Hall Of Fame is pretty much the same thing."

METALLICA drummer Lars Ulrich recently told RollingStone.com that he still hopes DEEP PURPLE will eventually get recognized by the Hall. "I'm not gonna get into the politics or all that stuff, but I got two words to say: 'DEEP PURPLE,'" he said. "That's all I have to say: DEEP PURPLE. Seriously, people, 'DEEP PURPLE,' two simple words in the English language. But definitely, NIRVANA is a no-brainer for the first year and I'm glad that KISS is getting the long-overdue recognition that they deserved for everything that they pioneered, and then I got two words, 'DEEP PURPLE!' Did I say that already?"

For the fourth consecutive year, the public will be able to vote alongside the more than 800 artists, historians and music industry insiders of the Rock Hall voting body. From now until December 9, fans can vote on RollingStone.com for the nominees they'd like to see inducted. The top five acts will comprise a "fan's ballot" that will count as one of the ballots that determine the class of 2016.

The last time PURPLE was denied entry, they were passed over for the likes of pop singer-songwriter Randy Newman and R&B singer Donna Summer.