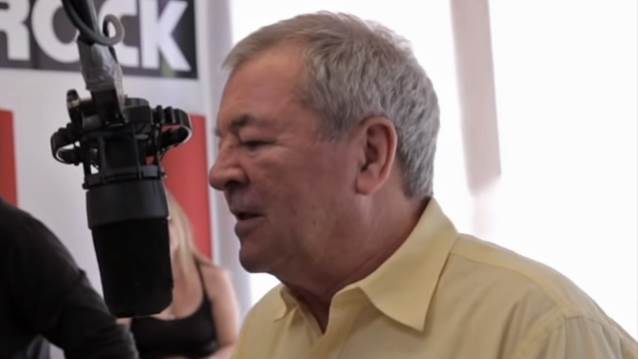 DEEP PURPLE singer Ian Gillan was recently interviewed by Italy's Radio Rock FM 106.6. You can now watch the chat below.

Asked if there is any chance that DEEP PURPLE could reunite with guitarist Ritchie Blackmore for a one-off concert, or possibly even just one song, before the band calls it quits, Gillan said: "Let me give you an example. Say you were divorced, say you got divorced, and there was acrimony and difficulty. And lots of relatives and children were affected, and life went on. Then you got married again. And then someone says, 'Oh, we want you to get together with your old wife, and your new wife, all together, and we're gonna have a wonderful time.' Can you imagine how difficult that is in human terms? Now, I understand that we're professionals and we have a kind of responsibility, but, to be honest, we have never, ever considered the commercial aspects or the fans' aspects or any of those things when we make decisions, because what we always do is what is most natural and follow our passion and hope that the audience will like it.

"Everyone knows the history," he continued. "PURPLE was on the downslope when Ritchie left, and with Steve [Morse, Blackmore's replacement], we got back on the upslope again. So it would be, in the greatest scheme of things, impossible to do that. And I think it's gonna be increasingly difficult as the years go by, because no one has much interest in that sort of thing.

"We have no great passion or dislike for Ritchie — we're actually exchanging communications and ideas through our offices, so there's no nasty feelings left, I don't think, in that respect. But I think it's too late. We're thinking about the end now. And the other thing is it would just open the damn gates and all this whole damn thing would start all over again just when we put it to bed.

"As far as I know, everybody in the band would think that was a bad idea," Ian added. "And let's just let it rest. Let's just wish Ritchie well, and do what he does, and we'll do what we do. Things are going along very nicely now."

Gillan went on to say that calls for a DEEP PURPLE reunion with Blackmore are "not something that we hear a lot about. It's just a small faction, a small number who would like this," he explained. "And I don't think those are the guys that even come to the concerts; I don't believe that. This is just one of those chewy little nuggets of conversation that the journalists like to say.

"We're so close to the end now — within a year or two, three, four… I don't know. Who knows? But it's close. And I think probably, as Ian Paice said, we're happy now. It stopped raining. The sun's shining. Let's enjoy it."

Blackmore previously suggested that PURPLE's manager had blocked him from joining his former bandmates onstage during the 2016 Rock And Roll Hall Of Fame induction ceremony, and he used that as an excuse for not attending the event.

Last year, Gillan threw shade at Ritchie's recent RAINBOW performances, saying that Blackmore is "not playing rock and roll like he used to."

In 2017, DEEP PURPLE announced the "The Long Goodbye Tour", fueling speculation that the band was planning to retire from the road after travelling the globe countless times over the course of a nearly five-decade career.