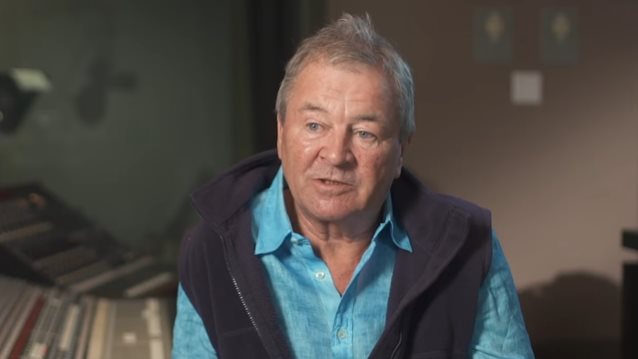 British rock legends DEEP PURPLE will release their new album, "InFinite", the highly anticipated follow-up to their worldwide chart-topping effort "Now What?!", on April 7 via earMUSIC.

A limited-edition EP for "Time For Bedlam", with non-album songs and unreleased recordings, will hit the shops on February 3.

A documentary movie, "From Here To InFinite", witnessing the songwriting process and the recording of the album with Ezrin, has been produced, allowing for the first time for the fans to be part of the private band member interactions in the studio. The movie will be included in some editions of the album and it will be presented before release in various fan events worldwide.

A short clip from the above-mentioned documentary movie can be seen below.

Singer Ian Gillan declared: "If you take it literally, you may, quite reasonably, think the 'Finite' part of the word describes the life of DEEP PURPLE, with a clear beginning and a nebulous end; but what of the 'in' bit? The word 'infinite' is a three-dimensional, double-edged sword. It describes something that goes on forever in all directions; not unlike its temporal equivalent 'Eternal'. What's that all about?

"Stephen Hawking declared (in 'A Brief History Of Time') that, before the Big Bang there was nothing. That would put the kybosh on the idea of our universe being Infinite, as he provides a starting point, which is not acceptable to the concept. So, Hawking's universe in 'Finite'; by definition; whether he agrees or not.

"Ironically, he is quite wrong (scientists always are eventually), therefore the Universe is infinite, which means it will never end, and also means that it never started, and the corollary to that of course is that we don't exist.

"There is a metaphysical solution to all this, but it will have to wait until the tour is over because (thanks heavens) there are only 24 hours in a day (for the time being) or 10 hours in a metric day. More on that later…"