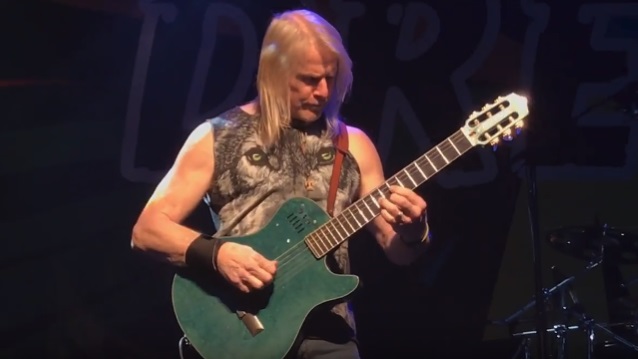 Steve Morse is asking for the public's help to get back a prized possession — a Buscarino acoustic electric guitar — after it was stolen last week.

The instrument went missing during the load-in for a DIXIE DREGS show last Wednesday, March 7 at the Lincoln Theatre in Washington D.C.

The DEEP PURPLE axeman has owned the guitar for 30 years and is also offering a reward for its safe return.

A message on Morse's Twitter reads: "Ok all Dregs fans and Steve Morse fans he needs your help. Steve's Buscarino electric acoustic guitar was stolen in DC during load in. We need help keeping a look out for it. Police have been called and are actively watching video footage. But there is a reward with no question asked, if returned."

Fellow legendary guitarist Steve Vai also appealed to the public on his friend's behalf, writing: "One of the hardest things a guitarist may have to face is when one of their vital guitars gets stolen. Unfortunately that's the case with our great Steve Morse. His handmade custom Buscarino guitar, was lifted during a load in at the Lincoln Theater in DC on March 7, 2018. He has used this guitar for the last 30 years. If anyone has any leads on where this guitar could be, or if you see it, or if it comes up on your radar for some reason, please write to us."

Morse has been lead guitarist for DEEP PURPLE since 1994, and his solo career has encompassed rock, country, funk, jazz, classical and fusion.

Hi Steve Morse fans. Steve’s electric acoustic guitar was stolen during load in in DC. Police are going over footage now but we do have a no questions asked reward if returned.. please help locate this guitar! pic.twitter.com/Z6KMAKGXae

One of the hardest things a guitarist may have to face is when one of their vital guitars gets stolen....