These days DEEP PURPLE's "Smoke On The Water" is such a ubiquitous rock "anthem" that it almost seems as if it has been out there forever. Yet the story of how this most famous of metal tracks came into being is shot-through with chance incidents, any one of which could have seen the recording stifled at birth, leaving music writers to scrabble about for another "best riff of all time" contender (and five hard-working musicians considerably less well-off.)

Incredibly, although the backing to "Smoke On The Water" was the first track laid down for the "Machine Head" album (while the Swiss police hammered at the door at 2:00 a.m. to try and get the noise stopped), in the ensuing chaos of being evicted from their temporary studio and washing up in the corridors of the Grand Hotel (where they built a studio in the corridors using old mattresses and egg cartons for sound-proofing!), the tape was almost forgotten — until an engineer pointed out that they were one track short of an album. The band only roughed it out as something to play to their Montreux host and hero of the fire, Claude Nobs, who told them it was far too good to leave in the can…

Due in the spring of 2017, "Fire In The Sky" is a new book which looks in detail at this important period in DEEP PURPLE's history and the making of their breakthrough album "Machine Head".

While the fact that a fire destroyed their original recording venue is well known to most music fans, the book detours to look at the cause of the blaze, talking to people who were at the show, and gets to the bottom of just what were Frank Zappa's last words when he dashed off the casino stage as the roof burst into flames? And in these times of economic hardship, isn't it inspiring to know that punitive tax rates back home were responsible for DEEP PURPLE being in Montreux in the first place?

This book looks back at the events which led to DEEP PURPLE's bizarre and Heath Robinson-esque "Machine Head" hotel recording sessions in the winter of 1971. And as for that "hit to be," "Smoke On The Water" was not even tried out on stage, and might never have been played live at all were it not for a request from the BBC for a radio session. It went on to sell 12 million copies and is probably the only gold disc ever made to actually be presented to a city. And yes, there really is a music shop in London which threatens to fine budding guitarists should they dare to try out the riff in-store.

The story takes in the subsequent debilitating American tours where "Machine Head" quickly became a massive-selling album, even as the relentless gigging pulled the band apart. Memorabilia and many rare and unseen photographs illustrate the story, including remarkable images of the casino fire and aftermath and Ian Gillan with his notepad writing the lyrics in the studio. The music, gigs and lyrics are covered while appendices include tour dates and a discography, as well as a map showing the important sites for any future visitors.

Several myths are also laid to rest, many fans trekking to Montreux visit the wrong Grand Hotel altogether, while down the road the wealthy owners of luxury apartments sit blithely unaware of the music history made in their living rooms.

This book follows Easy On The Eye's previous DEEP PURPLE book "Wait For The Ricochet", which told the story of the band's formation (and sold out the first print run in weeks). As before it is written in a way which will appeal both to the casual rock reader as well as the more informed fan. 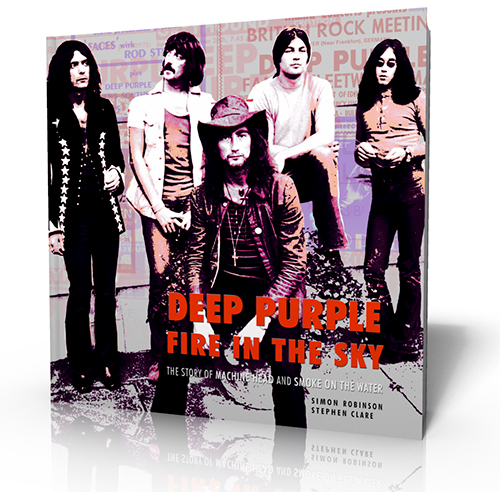