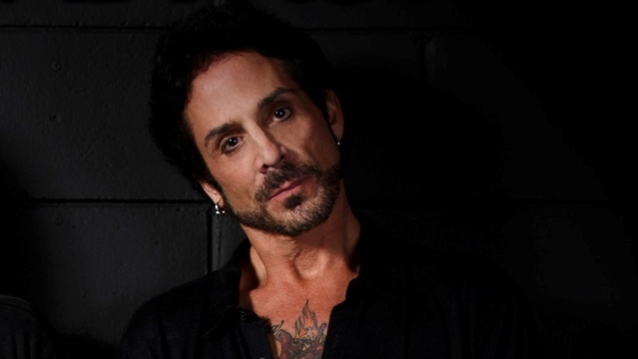 Former JOURNEY and current THE DEAD DAISIES drummer Deen Castronovo recently spoke with Andy Rawll of MetalTalk.net. The full conversation can be seen below. A few excerpts follow (as transcribed by BLABBERMOUTH.NET).

On how he bounced back from his 2015 indictments for rape, assault, sexual abuse, unlawful use of a dangerous weapon and contempt of court:

Deen: "For me, what I had to do was really focus on recovery. That was most important — that was job one — and gaining the trust and respect back from my family, my kids, my wife, my grandbabies, my father, my mother, everybody. I wasn't thinking about music at that time. I didn't even touch my drum kit. I'd walk by and go, 'Yeah, it's not time.' I just knew. There was a point when [the Italian record label] Frontiers asked me to do REVOLUTION SAINTS, and I went, 'Well, let me think about it.' I waited another year until it was time. It was like, 'Okay, I'm ready to do this. Let's go ahead and do this.' For me, it was really important just to really stay focused, because this disease beat me up for quite a while, and it's nice to be away from that. Being the person that I am today, it's a good thing."

On drawing musical inspiration from that period in his life:

Deen: "REVOLUTION SAINTS was really almost autobiographical. It was a lot of stuff about what was going on in my life, and I had to spill it. It was something that really needed to be taken out of me, so that was a huge thing. Now, THE DEAD DAISIES have fulfilled the recording/touring side, which is what I've been aching to do, but I knew I couldn't at that point... I'm working again, I'm playing, I'm loving it."

Deen: "That was the first song I've ever written. I came up with a guitar riff and I sent it to Doug [Aldrich], and I said, 'Can you do something with this?' He goes, 'Yeah. Let me mess with it for a little while'... Lyrically, it was funny. When I was in treatment, every day, we would have to journal. At the end of every one of my journals, I would say, 'Freedom, coming my way.' It was like, every day is a day towards freedom — freedom from drugs, alcohol, all the stuff that kind of has weighed me down in my life. Being able to purge on that record was huge for me. I needed it — I really did — and that [song] really kind of spills it."

On not rushing his recovery:

Deen: "You can't, especially in this industry. I spent 22 years on and off of drugs. For me to finally hit bottom, come back up and go, 'You know what? If I'm going to do this, I'm going to do this right this time. It's not going to be half-measures anymore.' I had to throw everything aside and put that first. It's still first — God and sobriety, family, job, in that order. That's my mantra now; that's what matters to me."

On his performance on the latest DEAD DAISIES album, "Burn It Down":

Deen: "Usually, I'm a very chops-oriented person. I'm a very busy drummer. I remember John Corabi coming up and he goes, 'Deen, put on your Bill Ward cap.' Once he said that, I saw the vision — it was like, 'I know what they need. I know what they want.' I did my best to deliver for them... Being in JOURNEY as long as I was, you learned how to play for the song, number one. There was a certain swing that Steve Smith has. I did my best to duplicate his stuff, but I noticed on this record, it just felt really, really swingy. It's still straight, but... you can feel what's going on. It's kind of a cool thing. I think I brought a little bit of that to the table – a little bit more of a swing, a little bit more of a bounce."

On reconnecting with JOURNEY guitarist Neal Schon for a February 2018 benefit show:

Deen: "Honestly, it's an honor. To work with JOURNEY at all was a blessing and a privilege and an honor. They did what they had to do, and I never fought them for that. That was the smart thing to do; that's the business thing to do. But Neal and I have always been really close. Neal found me; he discovered me in a little rehearsal place in San Rafael. I've always been tight with him. Even when all this went down, he always checked on me... We've always kept in contact, so I'm very loyal to him. Even though he had to do the tough love thing, he never gave up [on me]. I respect Neal for that. He's my big brother, and I'd do anything for him... I always wanted to be in JOURNEY. I had two bands I wanted to be in when I was young — KISS or JOURNEY. KISS, I look like crap in spandex, so we know that wasn't going to happen. JOURNEY was my [other dream], because I love Steve Perry, and I love what Smith brought to the table. To be able to fill that seat for 17 years was an honor. Now he's back where he belongs. He needs to be there. That is his band. I warmed the seat, but that's his gig. He deserves it. He's original — he's the best."

Deen: "There's stuff that Mr. Perry's done that nobody can touch. To me, he is the greatest singer of my generation — he and Ronnie James Dio."

Deen: "I would love to play drums on a STONE SOUR record, but I love Roy [Mayorga]. I love Corey Taylor — I think he's a genius. The man is just brilliant, in my opinion. Great songwriter, awesome poet. I love SLIPKNOT to death, and I've always loved STONE SOUR. I'm a huge fan, so I would love to work with him if I could."

THE DEAD DAISIES continue to tour in support of their fourth album, "Burn It Down", which was released on April 6 via Spitfire.