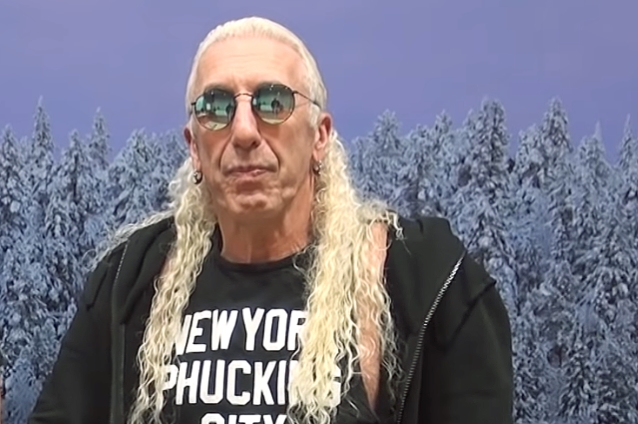 TWISTED SISTER frontman Dee Snider has confirmed to Finland's Kaaos TV that he is planning the follow-up to his latest solo album, "For The Love Of Metal", which came out in July. "Napalm, my label, has already green-lit the record," he said (see video below). "We're already working on songs for the next record. We're not ready to go to the studio yet — it's a process. And with everybody [being involved with other projects] — [producer] Jamey's [Jasta] got HATEBREED and JASTA, and my other players, the Bellmore brothers, they work with TOXIC HOLOCAUST and… I forget the name of their other band… But they're always working, and they work with me. So we're working on new stuff."

He continued: "I really feel like I have found my place in the contemporary scene. I know I'm a legacy artist and I'm viewed that way, like [Rob] Halford or any of these people, but at the same time, I've got a sound that's connecting with people — my old fans and new fans. And for me, as an original metalhead, I love the idea that I'm making music that people feel matters now. It's not an oldies thing — it's not about songs from the past that they love. It's new songs from today that mean something to them. So that's important to me. So, yes, there will be 'For The Love Of Metal II', or whatever we call it."

Asked if he will be more involved with the songwriting next time around than he was on "For The Love Of Metal", Snider responded: "You know what? I don't think so. As I said very publicly, I wasn't involved in the songwriting [on 'For The Love Of Metal']. I stopped songwriting in the '90s, 'cause I really didn't understand how to make contemporary, new-sounding metal songs without copying other bands. I found myself studying and imitating bands, and that's not from the heart. Music should be from the heart. When I wrote 'We're Not Gonna Take It', when I wrote 'I Wanna Rock', it was from here [points to his heart], it was not from my brian. So with Jamey and the guys, they really understood me, and Jamey spent a lot of time with me to know what was important to me. And they absolutely had their finger on the pulse of the songs, of what I should be doing. And it came out incredible. So I'm not gonna throw a wrench in the works and say, 'Well, now I'll take it from here, boys.' But that said, certainly now that I'm feeling understanding what my sound is, understanding what is connecting with people, I expect that I will be more involved. I just didn't wanna make it sound like I was gonna take over control from Jamey and the guys. I told Jamey, 'Man, you had a vision with me, and I wanna keep on that path.' I mean, there were times on this record where I gave input, but it wasn't enough that I was gonna put my name down and say, 'Oh, I need credit for that,' or whatever, 'cause I had an idea. Yeah, I had ideas, but they weren't most of the ideas. I can see getting more involved, but I'm certainly gonna let Jamey and the Bellmore brothers… they're gonna drive and I'm gonna sit in the back and go like this [raises his hand in approval]."