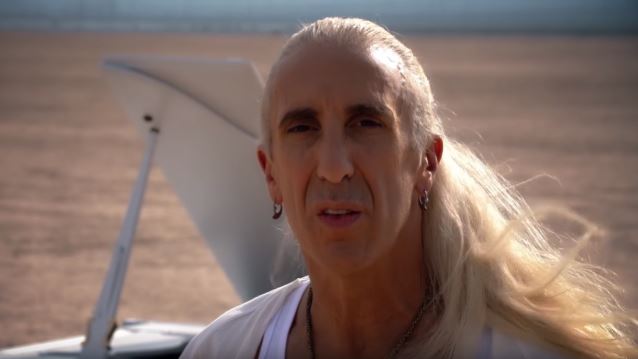 TWISTED SISTER frontman Dee Snider has collaborated with famed illusionist Criss Angel on a new video for the band's classic song "We're Not Gonna Take It" to generate awareness and funding for Angel's new charity. The clip, which was directed by Angel in the desert outside of Las Vegas, can be seen below.

"We've known each other since the 1990s, and he was a strong proponent of mine for years," Angel told the Las Vegas Review-Journal. "We are both from Long Island, or as we like to think of it, 'Strong Island,' and his record publishing company gave me the rights to the song and it is our anthem for gratis. Dee was unbelievably generous with his time and participation."

Tickets are available now at CrissAngelHELP.com.

With the same passion and grandeur Criss lends to his craft, he is setting the ambitious goal to raise $1 million in a single evening. Every dollar generated will benefit pediatric cancer research, treatment and ultimately a cure through the Johnny Crisstopher Children's Charitable Foundation, a nonprofit organization named after Criss's young son who was diagnosed with Acute Lymphoblastic Leukemia (ALL) last year.

"Every three minutes a child will be diagnosed with cancer, and less than 70 cents out of every $100 raised by the American Cancer Society goes to pediatric cancer," Criss said. "We must bring awareness and funding now to help these children and families living with this nightmare."

Rallying his celebrity friends and fellow entertainers, Criss has assembled a superstar line-up for this one-of-a-kind event. In addition to celebrity performances, attendees will have the chance to win priceless experiences and memorabilia in HELP's live and silent auction. One-of-a-kind experiences including a weekend at Criss' personal estate, Serenity, with all the VIP trappings; a private magic lesson and behind the scenes backstage pass to see how Criss pulls off the spectacular illusions in MINDFREAK! Live; a luxurious Caesars Palace Celine Dion weekend including dinner at Restaurant Guy Savoy, a two-night stay and tickets to see and meet Celine Dion; a UFC 207 VIP package with tickets and a meet-and-greet with Dana White; show tickets and meet and greets with Jennifer Lopez and Britney Spears; autographed memorabilia from Oprah Winfrey, Shaquille O'Neal, Floyd Mayweather, Elton John, Mike Tyson and many more.

"I can promise this will be a night to remember," said Criss. "Thanks to my celebrity friends, many unsung heroes and my insanely generous partners, Cirque du Soleil and MGM Resorts/Luxor Hotel & Casino, for the outpouring of love and support and making this incredible night possible," Criss said.

HELP will be held at the Criss Angel Theater at the Luxor Hotel & Casino in Las Vegas on Monday, September 12, 2016. Doors open for the silent auction and the gold carpet begins at 5:30 p.m. followed by a celebrity auction at 7 p.m. and the live show at 8 p.m.