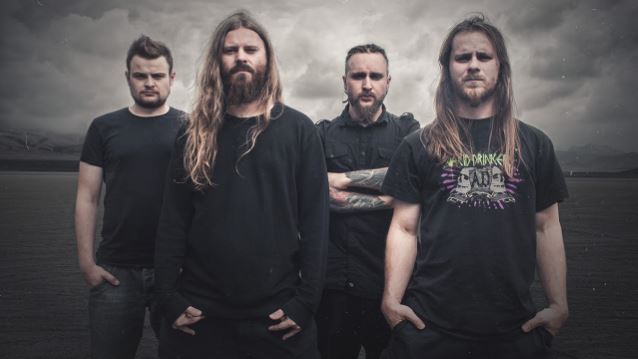 Lukasz commented on the video: "Animation is an area extremely time-consuming and the fact that I work alone only adds to the sad fact that, especially during complex productions such as the video for the song 'Veins' by DECAPITATED, my little ones await their father to come back home in the evenings in vain and my newlywed wife withers at the window longing to see me. Despite these minor inconveniences, I do not complain because I love to combine sound with vision.

"On most occasions I prepare scripts myself. And so it was this time. I came up with a short story with the apocalypse in the background, set in a slightly imaginary universe in which droids fight on battlefields instead of humans, intelligence cells of feuding superpowers plot their rise to power, and the relics of the Cold War keep waiting for someone to finally press that 'damn button.'"

The "Veins" video was released in support of the DECAPITATED's forthcoming tour dates across the U.S. and Europe. The song is taken from the band's sixth album, "Blood Mantra", which was released in September 2014 via Nuclear Blast. The follow-up to 2011's "Carnival Is Forever" was recorded at Hertz Studio in Bialystok, Poland with producers Wojtek and Slawek Wiesawski. The CD cover artwork was created by the Polish artist Lukasz Jaszak, who previously worked with the band on "Carnival Is Forever".

DECAPITATED guitarist and founding member Waclaw "Vogg" Kieltyka previously stated about the musical direction of the new album: "We flirt with various tempos mixing death metal with grindcore and almost outright black metal atmosphere together with more, so to speak, 'crowd-puller' beats verging on groovy, almost stoner-rock climates. There are also a few more modern metal rhythmic riffs where we return to the climate of 'Organic Hallucinosis' album. Rasta [Rafał Piotrowski] is a much more experienced vocalist compared to the 'Carnival Is Forever' album times. And his voice sounds more powerful and deeper."