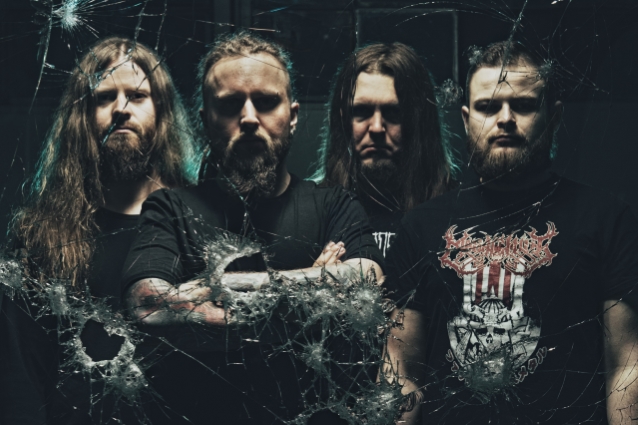 The band said in a statement: "We would like to thank [Michal] for his friendship, his huge support, and his hard work as the drummer for DECAPITATED. We wish him well on his new path. All the best, brother!

"We will take some time before we find and announce our new drummer. Until then, our friend James Stewart (VADER) will join us as a session drummer. Luckily, he found some free time between VADER shows and is able to play some selected live shows. You will all experience his talents soon."

Back in March, DECAPITATED guitarist Wacław "Vogg" Kiełtyka said that he and his bandmates were "ready to return," two months after all rape and kidnapping charges against were dropped against them in Spokane County.

Less than two weeks before the Polish death metal musicians were scheduled to go on trial in January for allegedly kidnapping and raping a woman on their tour bus four months earlier, Spokane County prosecutor Kelly Fitzgerald filed a motion dismissing all rape and kidnapping charges. The motion cited "the well being of the victim" as a reason for dropping the charges without prejudice, meaning the four members of DECAPITATED could be prosecuted in the future.

Vogg told The Moshville Times in a 2017 interview that "Anticult" "follows on from the previous album in some ways but there's obviously some differences. The first thing that’s different is the sound of the album, as we changed the people we worked with and the studio we used to get a bit more of a raw sound," he said. "In my opinion, I'd say this album is more of our 'own' album. With 'Blood Mantra', we were kinda influenced by MESHUGGAH and bands like that quite a bit. I feel with this album, we've kind of found our identity and there's a lot more groove in this album. The songs are also a little bit shorter than on 'Blood Mantra', which, in my opinion, is good. It means that you don't have to wait too long for things to happen and the action is much faster than on the previous album. In some ways, I feel as though we took the experience we gained from 'Blood Mantra' and tried to up the ante with it and make a better album. It was kind of challenging, but I really feel as though we've taken a step forward with this album."

Although we finished 2018 completely tired, we are happy.

We would not have been able to end this year on such a...

Posted by Decapitated on Friday, December 21, 2018