A video trailer for "Rockers & War", the new album from German death metallers DEBAUCHERY, can be viewed below. The follow-up to 2008's "Continue To Kill" is scheduled for release on April 3 via AFM Records,

Frontman Thomas "The Bloodbeast" Gurrath previously stated about "Rockers & War", "The first part [of the new CD], the War part, contains six songs of violence and death. Some even sound a little bit like SLAYER with keyboards or DIMMU BORGIR black metal. I don't know. Cool stuff, fast, melodic but brutal as hell. All the speed freaks will love the 'Savage Mortician' with its 280 bpm. The titles are: 'There Is Only War', 'Primordial Annihilator', 'Savage Mortician', 'Honour And Courage', 'Killing Ground' and 'Wolves Of The North'.

"The second part, the rockers part, contains another five songs. Pure hard rock, and some surprises. Music for headbangers, party stuff and songs for all the Hell Bunnies out there. Even another DEBAUCHERY ballad. The titles are: 'New Rock', '3 Riff Hit', 'Demon Lady', 'Hammer Of the Blood God' and 'I'm A Rocker'.

A new DEBAUCHERY song titled "There Is Only War" is available for streaming on the band's MySpace page. 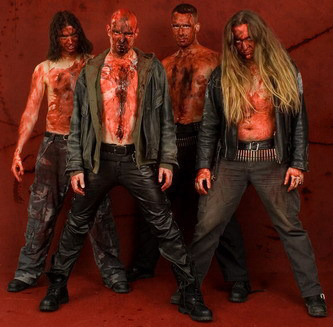