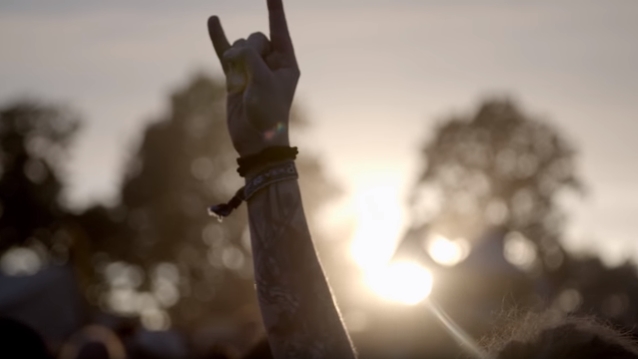 According to BBC News, the song "Eaten" from the death metal supergroup BLOODBATH was used in a psychological test by Macquarie University's music lab.

The university concluded that neither the cannibalism-themed track — nor the gruesome lyrics of others of the genre — inspire violence.

Thirty-two self-declared fans of death metal or heavy metal music and 48 non-fans of such music participated in the study. Each participant was played Pharrell Williams's "Happy" or BLOODBATH's "Eaten" through headphones, while they were shown a pair of images — one to each eye. One image showed a violent scene, such as someone being attacked in a street. The other showed something innocuous — a group of people walking down that same street, for example.

"Eaten" was selected because it has explicitly violent lyrics that are accompanied by music with acoustic qualities that are characteristics of biological signals of aggression (e.g. nonlinearities, low mean pitch level, growling or screaming vocalizations). "Happy" was selected because it depicts prosocial and joyous lyrics accompanied by musical qualities with a positive emotional connotation (e.g. conventional song structure, major tonality, consonant sonorities and high mean pitch level).

"It's called binocular rivalry," explained lead researcher Yanan Sun. The basis of this psychological test is that when most people are presented with a neutral image to one eye and a violent image to the other — they see the violent image more."

"The brain will try to take it in — presumably there's a biological reason for that, because it's a threat," Professor Bill Thompson from Macquarie University, which is based in Sydney, Australia, said.

"If fans of violent music were desensitized to violence, which is what a lot of parent groups, religious groups and censorship boards are worried about, then they wouldn't show this same bias. But the fans showed the very same bias towards processing these violent images as those who were not fans of this music."

Thompson added: "[Death metal] fans are nice people. They're not going to go out and hurt someone."

BLOODBATH singer Nick Holmes told BBC News that his band had no issue with its music being used like this. "The lyrics are harmless fun, as the study proved," he said. He added that BLOODBATH's lyrical content was "basically an aural version of an 80s horror film".

"The majority of death metal fans are intelligent, thoughtful people who just have a passion for the music," he said. "It's the equivalent of people who are obsessed with horror movies or even battle re-enactments."

The findings are published in the Royal Society journal Open Science.