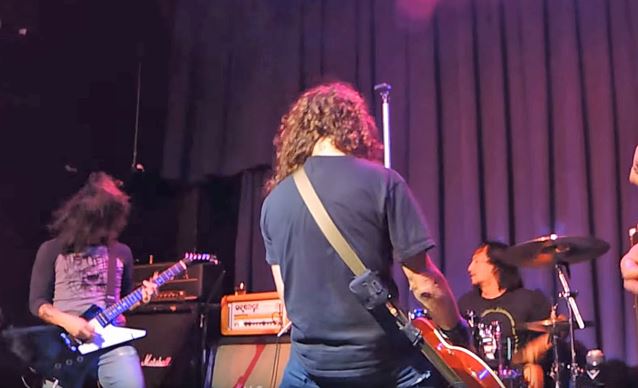 In addition to Galeon, THE BUTLERS feature current and former members of JETBOY, RUFFIANS and EXODUS. They play shows throughout California performing a slew of classic rock covers. Members of MACHINE HEAD, TESLA, TESTAMENT, FUEL, EXODUS and FANG have all sat in with the band.

In a September 2009 interview with Metal Rules! Radio, Andy Galeon stated about his departure from DEATH ANGEL, "We had a tour booked, and basically, I had personal things I had to deal with — I had a newborn baby — and I just was like, 'Well, I've gotta do stuff at home.' We [the members of DEATH ANGEL] weren't communicating well or nothing. I wasn't about to ask them to not go [on the road], so I just said, 'I'll just leave then.' I even pointed out a few [other drummers] from the [San Francisco] Bay Area that could be a fill-in or a replacement, whatever you wanna call it. I mentioned Chris Kontos [MACHINE HEAD, TESTAMENT], I mentioned Will Carroll [OLD GRANDAD, SCARECROW, VICIOUS RUMORS, MACHINE HEAD], and I think there was another guy... I knew they were gonna go with Will, because Ted [Aguilar], the rhythm guitar player [for DEATH ANGEL], has played with him in a bunch of bands — he even plays with him in SCARECROW, so I knew it would be easier."

Galeon added that the fact that he and some of the guys in DEATH ANGEL are family has not made it easier for them to be in a band together. "Sometimes being family, it makes it harder, for some reason. I don't know why, but it's just that way sometimes. Imagine being in a band with your brother for over 20 years, jamming with the same guy. You know every little quirk, you know every little thing that pisses him off, and you press those buttons when you have to, and he presses your buttons when he has to... I don't know what it is, man. You'd think we'd communicate more, but at times it's not that way. Musically, we always communicate pretty well; I mean, everything goes smoothly, [and] we push each other musically."

DEATH ANGEL's eighth album, "The Evil Divide", recently entered The Billboard 200 chart at position No. 98 with first-week sales of just over 6,000 units — nearly all from pure album sales. The set followed the No. 72-peaking "The Dream Calls For Blood", which opened with around 5,400 copies back in 2013.