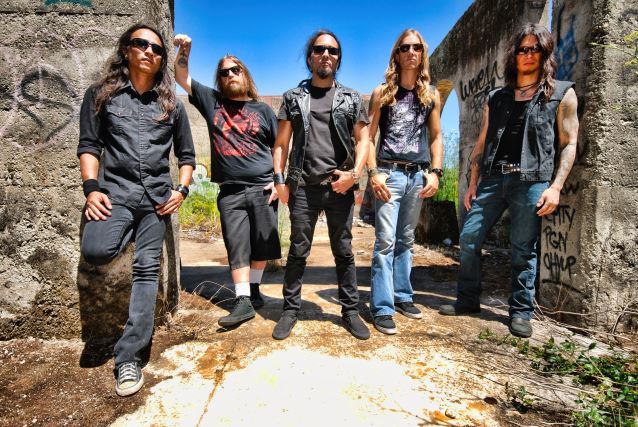 Capital Chaos TV has uploaded video footage of DEATH ANGEL's October 17 performance at Slim's in San Francisco, California. Check it out below.

DEATH ANGEL's seventh album, "The Dream Calls For Blood", was released on October 11 in Europe (except for the U.K. where it arrived three days later) and October 15 in North America via Nuclear Blast Records. The follow-up to 2010's "Relentless Retribution" was recorded at Audiohammer Studios in Sanford, Florida with producer Jason Suecof (TRIVIUM, AUGUST BURNS RED, THE BLACK DAHLIA MURDER, ALL THAT REMAINS, WHITECHAPEL, DEVILDRIVER), and once again features cover art by Brent Elliot White (JOB FOR A COWBOY, CARNIFEX, WHITECHAPEL). Fans will be able to purchase a standard jewelcase version of the album or digipak edition that includes a bonus track and bonus DVD.

DEATH ANGEL's North American headlining tour in support of "The Dream Calls For Blood" will kick off tonight (Friday, October 18) in San Francisco. Support on the trek will come from 3 INCHES OF BLOOD, BATTLECROSS, REVOCATION and DIAMOND PLATE. 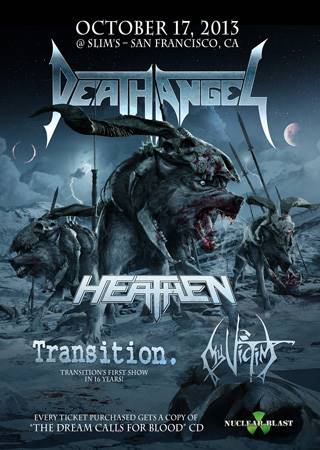