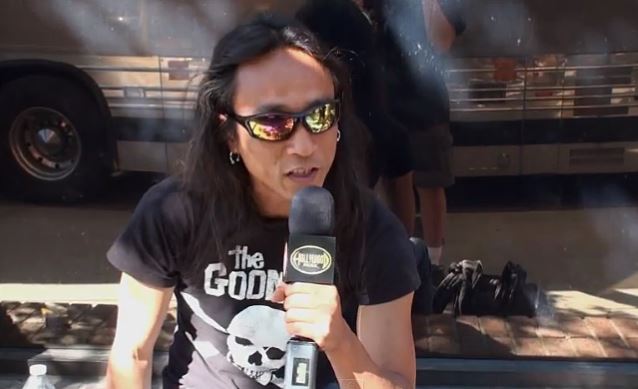 San Francisco Bay Area metallers DEATH ANGEL will enter the studio on October 1 to begin recording their new album for an April 2016 release via Nuclear Blast.

Aguilar also revealed that DEATH ANGEL's long-awaited "Thrashumentary" DVD has finally been completed and will be made available at the end of the summer. He said: "We're just waiting on a release date from Nuclear Blast. Everything's handed in — the masters and the artwork. We're just waiting on Nuclear Blast to go, 'All right, here's the release date, so we can announce it to the whole world.' And accompanying that DVD is a live audio that was recorded [in] San Francisco. So it's a live audio CD, which sounds really cool. So that's gonna get released. We're shooting around July or August."

According to a press release, "Thrashumentary" is a combination live video and documentary, all wrapped up in one thrashing DVD. The footage was directed by Tommy Jones (SOILWORK, KATAKLYSM) and mixed by Chris Clancy of The Studio. The film gives the viewer an in-depth look into one of the longest-running thrash acts out of the San Francisco Bay Area, a region known for turning out historic thrash bands such as METALLICA, TESTAMENT and EXODUS.

With the band surviving a span of more than 30 years of activity, and nearly three decades since the release of the classic album "The Ultra-Violence", now was the time to tell the story. Filmed on the "Relentless Retribution" world tour, the film shows the bands energetic live performance, cut with documentary-style interview footage. "Fly-on-the-wall" filming of the band talking about their career and footage of the band on the road, give the viewer a personal connection to what is known as the mighty DEATH ANGEL.