David Lee Roth has shot down suggestions that his Las Vegas residency will simply see him covering VAN HALEN's classic songs with a new backing band. Diamond Dave is bringing the rock to the House Of Blues Las Vegas beginning on January 8, 10, and 11 at Mandalay Bay Resort and Casino.

"We do not sound like VAN HALEN live. You have not heard this," he told the Van Halen News Desk. "VAN HALEN live is lead guitar, bass, drums, sing. Here, we bring it the way a record brings it. To do that requires two or three guitars. We have five people hollerin'. It's big rock sound. It's not 'Just A Gigolo'. It's not brass band. That was a quickie vacation. This is not a tribute band."

He continued: "I wrote these songs. I structured these songs. We bring the respect and dignity to what we are doing the same way that the Lincoln Center brings to the Beethoven Festival with the latest Philharmonic. It's a new orchestra, and a whole new sound."

At press time, Roth's backing band hadn't been revealed. But he promised "a changing set of 26 instantly recognizable songs," pulled primarily from the VAN HALEN catalog.

"You only need five songs," Roth said. "You must have five songs in order to play Las Vegas. It says that in the Bible, or the Torah, or somewhere, we're pretty sure. Well, I have 20 songs... There is an attitude to Las Vegas. It's where we go to celebrate whatever 'living life large' means to you." 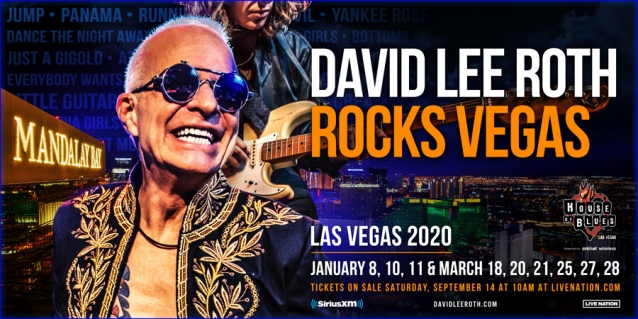