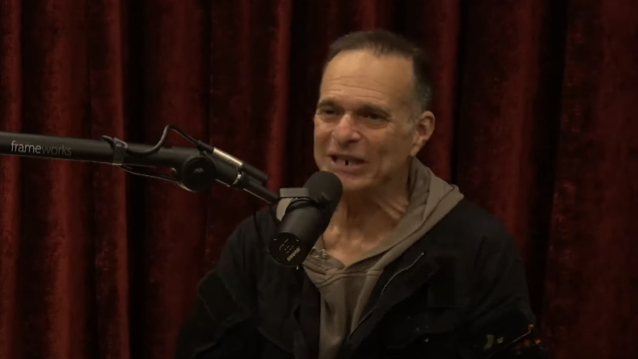 During an appearance on the latest episode of "The Joe Rogan Experience" podcast, David Lee Roth reflected on his brief stint as a morning radio show host.

Roth was hired with much fanfare as a replacement for Howard Stern, and the show debuted on several radio stations on January 3, 2006. While some people enjoyed the program, it didn't really look like there would be significant ratings increases, and he was let go at the end of April that same year.

According to Roth, part of the problem was that CBS Radio, which had produced Stern's ultra-successful terrestrial morning radio show, wanted David's program to follow a similar path. "You can't win if they expect you to be the same thing," David told host Joe Rogan (as transcribed by BLABBERMOUTH.NET). "My ratings were going up — everything was zooming, man. We were booming. And what they wanted was a repeat of what Howard was doing, and I just refused to do that. I was untenable. I was playing black music in the background. I was bringing in guests that had nothing to do with rock and roll.

"What they [initially] said [to me] was 'be yourself,' but I think what they expected was a duplication of a hero," he explained. "And I'm not a duplication… They expected that I was going to duplicate what would have come before, because it seems to be a tradition.

"When you put me in charge, it's a lot closer to what we're doing here. You know the term 'waba-sabi' — it means that which is a little roughed up at the edges.

"We were changing audience," he reasoned. "I would play Bob Marley, and they would say, 'You can't play this. You have a rock and roll audience.' And I'd go, 'This is what rock and rollers listen to on vacation.' And they'd go — serious quote — they would say, 'No, no. We want you to play NICKELBACK.' It was NICKELBACK and [LYNYRD] SKYNYRD. And I said, 'I have news for you: when LYNYRD SKYNYRD goes to the Bahamas on vacation, they listen to Bob.' [Laughs] Bob Marley is the sound of vacation to rock and rollers.

"I was playing background music throughout my talking. Like right now, I would be having music congruent in the background to what we would be discussing… And I'd have an intro from a Wilson Pickett tune, or I'd loop a musical intro from KOOL & THE GANG, or I'd loop the musical intro from some 'Arabian Nights' something or other. And, 'No, no, no, no. This is classic rock. We wanna stay in the classic rock mode. We want to stay with classic rock-type guests on your program.'"

Ultimately, David believes that he is an acquired taste, and as much as they said otherwise, the executives at CBS Radio didn't want to allow him to do his thing.

"You either love Roth or you hate him," David said. "I'm speaking in the third person. You're either entertained or you really have no taste for me.

In a 2010 interview, former CBS executive Rob Barnett said that Roth was hired because he was the only viable candidate with an ego large enough to think he could step into Stern's shoes. Roth reportedly did a tryout in Boston that Barnett called "amazing," but ended up being a major disaster when he took over Stern's seat in early 2006.

"The meltdown came day one or day two," said Barnett, "when he got in the chair … and wouldn't listen to anyone that was there to do only one thing… to help him."

Roth later said he was told about the syndicated show's demise while riding in a car to the WFNY-FM studios in Manhattan.

"I was booted, tossed, and it's going to cost somebody," Roth said on his last show, implying that his lawyers would go after CBS Radio for the full compensation due from his reported $4-million contract.