Although most recognizable for his starring turns in the hit TV shows "Knight Rider" and "Baywatch", along with numerous feature film appearances ("Guardians Of The Galaxy Vol. 2", "Kung Fury", "Click", "The SpongeBob SquarePants Movie", "Dodgeball" and Marvel's original "Nick Fury: Agent Of Shield", among others) and roles on Broadway and the West End in productions of "Jekyll & Hyde", "Chicago" and "The Producers", megastar David Hasselhoff is ready to tackle a different role — the role of passionately earnest pop star singing for a new global consciousness in these difficult and troubled times. It's a role not unfamiliar to Hasselhoff, whose historic performance of the chart-topping single "Looking For Freedom" on the rubble of the newly fallen Berlin Wall in 1989 became a rallying cry not just to a reunited Germany but for all of the burgeoning democracies that were swept up in the winds of change.

For his new single, "Open Your Eyes", Hasselhoff has resurrected a song from that same decade by dark rockers THE LORDS OF THE NEW CHURCH and brought it into the present where it sounds as fresh and vital as ever. "Open your eyes to the lies right in front of you" goes the chorus, echoing the growing discomfort felt everywhere by today's media-saturated, politically marginalized population. Hasselhoff sings the refrain with legitimate fury and conviction against a backing track created by producer Adam Hamilton and renowned guitarist for THE STOOGES, and member of the Rock And Roll Hall Of Fame, James Williamson. As Hasselhoff says, "I found a very relevant song that tells our story and am very proud to sing our story through this song. 'Open Your Eyes' is as relevant today as it was 30 years ago when it was written! Let's make the world great again!"

To help bring the single to life, Hasselhoff has enlisted the video-making talents of Vicente and Fernando Cordero of Industrialism Films who, along with Los Angeles-based artist Dan Dowding of Media Pollution, have crafted a visual representation of the song. The video also leverages the power of social media by incorporating footage of Hoff fans from all over the globe who participated in the #EyesForHoff campaign. The final product is a video rich in spectacle but also carries its message just as effectively as it entertains.

Hasselhoff's new album, also called "Open Your Eyes", is set to be released on September 27, his first with L.A.-based label Cleopatra Records. The album features 12 other fierce new takes of classics such as MODERN ENGLISH's "I Melt With You", ECHO & THE BUNNYMEN's "Lips Like Sugar" and David Bowie's inspirational anthem "Heroes", each of which is brought to life in collaboration with one of a diverse array of artists ranging from industrial wild child Al Jourgensen of MINISTRY, major film composer Tyler Bates ("Guardians Of The Galaxy", "John Wick" franchise), country legend Charlie Daniels, Rock And Roll Hall Of Fame nominee Todd Rundgren, '80s new wave icons A FLOCK OF SEAGULLS and many more. "Open Your Eyes" will be available on both CD in a deluxe digipak with a special collectible "Hoff Army" patch, on vinyl in limited-edition red vinyl and on all digital formats starting September 27. 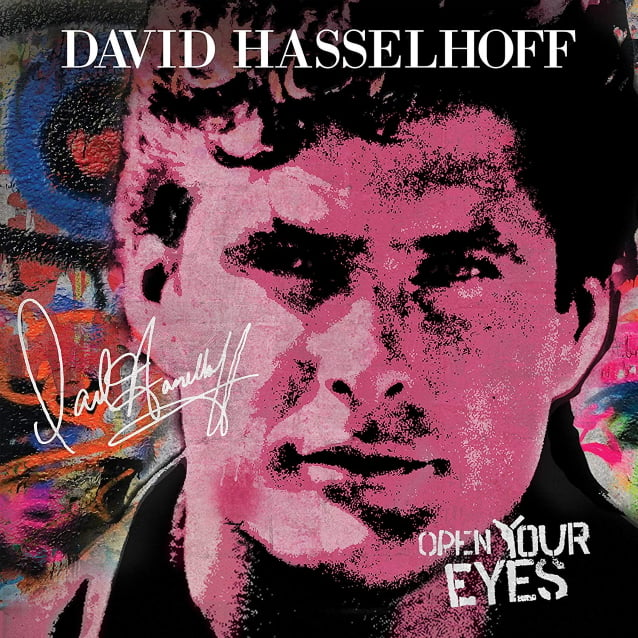