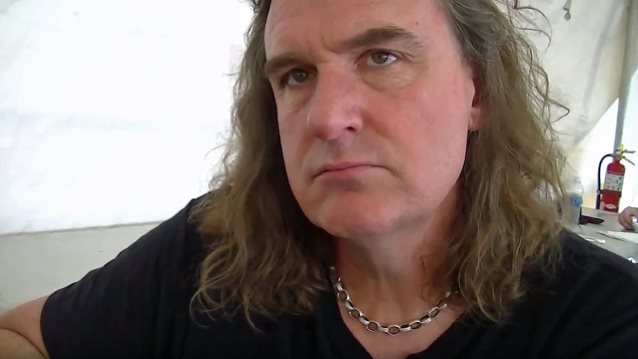 Author Marisa Williams conducted an interview with MEGADETH bassist David Ellefson at this year's edition of the Fort Rock festival, which was held on Saturday, April 30 and Sunday, May 1 at JetBlue Park in Fort Myers, Florida. You can now watch the chat below.

Asked about the different instrumentation MEGADETH has incorporated into some of its albums over the years, Ellefson said: "In MEGADETH, we've had everything from sitars to the Nashville Symphony Orchestra director, which is [producer] Dann Huff's father, come in on the 'Cryptic Writings' album. Even strings on the 'Dystopia' record, [and guitarist] Kiko [Loureiro] being able to play piano."

He continued: "I played piano years back. In fact, I wrote some stuff, actually some riffs that turned into guitar riffs on the 'Youthanasia' record. So the piano has actually been a friend to MEGADETH. I mean, the piano is an interesting instrument, because, to me, it was very lightweight, almost like a sissy instrument that I never thought had a place in metal. But then I started to take some lessons. This was many years [ago], like, mid'-'90s, I bought a home in Arizona, and I thought, 'Well, I need to put in a pool table or a grand piano,' so I bought a grand piano, and I sat down and I learned how to play it and I took some lessons. And the kid who was giving me lessons, he was a child prodigy, and he taught me that the piano is really a percussion instrument. And you look at it from a percussion rather than a melodic point of view, and it really opened my eyes to that. And looking at everything in octaves versus on the fingerboard of an instrument, depending on how it's strung and the frets and everything. So all of a sudden I had a whole new view of it, and I was writing things that would become, basically, riffs for even MEGADETH songs."

According to Ellefson, "probably the strangest instrument" that he has seen incorporated into a metal album was when he worked with Max Cavalera on SOULFLY's 2004 album "Prophecy". He said: "[Max has] got instruments that I don't even know what the names of them are, that he brought from Brazil. He was into these very strange… It looked to me like it was a bow and arrow, and they're plugging it, and it had a name. So Max is one of these artists that reaches deep inside of his very historic culture and brings in those sounds. And me being of Norwegian and European descent, my ear kind of goes, I guess, a little bit to some of those things of a lot of the Northern European kind of music."