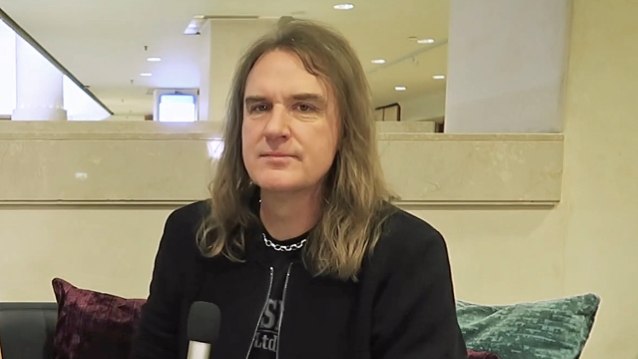 In a brand new interview with Metal Casino TV host Marielle Tengström, MEGADETH bassist David Ellefson was asked about the progress of the songwriting sessins for the band's follow-up to 2016's "Dystopia" album. He said (see video below): "[it's going] great. With 'Dystopia', we really cleaned out the vaults. I mean, it's not like there's a pile of songs sitting around that we can just go back and revisit and quickly whip out an album. And we learned with 'Dystopia' — take our time; make it great. We set the bar really high with 'Dystopia'; it was a very well-received album."

He continued: "It used to be, years ago, you'd make an album and go tour; make an album and go tour. And every album matters. But I think now, more than ever, because we have this legacy — we just celebrated 35 years of MEGADETH this last year, and that was cool, because it put a spotlight on every album. I think, as the band, it took us back into those album to really kind of revisit the things that really stood out on those albums and kind of revisit why the fans really loved them. And what I find is that a lot of really young fans, more than probably any other period, are going back into the '80s and some of those early '90s records — like, that's their sweet spot. And so it's fun when I see at a 'Basstory' [Ellefson solo event], I'll see a 14-, 15-year-old teenager, and I'll say, 'Hey, what's your favorite album?' and they'll go, ''Peace Sells'.' And I'm, like, 'Wow! You weren't even born. You weren't even a twinkle in somebody's eye yet at that point. And yet that's an era that they like."

Ellefson added: "MEGADETH is kind of a cool situation right now in the sense that we've got this great legacy of our past, and yet we can still write music and make, I think, great new albums moving forward too."

MEGADETH's next album will be the band's first to feature drummer Dirk Verbeuren (ex-SOILWORK), who joined the group nearly three years ago.

Prior to the arrival of "Warheads On Foreheads", MEGADETH reissued two of its iconic records, 2001's "The World Needs A Hero" and 2004's "The System Has Failed", through BMG on February 15.